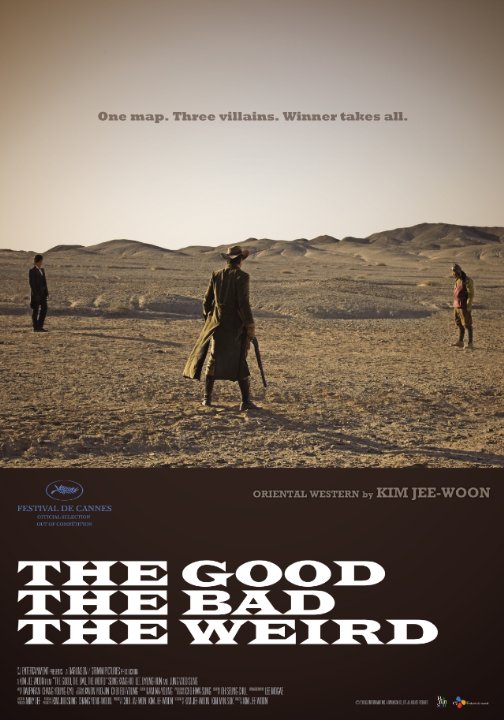 Plot: The story of three Korean outlaws in 1940s Manchuria and their rivalry to possess a treasure map while being pursued by the Japanese army and Chinese bandits.

The Good, the Bad, and the Weird is a zany action packed adventure western...from Korea. The set-up is straight out of a Sergio Leone spaghetti western complete with bounty hunters, train robbers, and desperadoes. The one difference is that it's WW2 era Manchuria instead of the Old West. The action sequences are excting and the humor adds a lot of fun to the rivalry and cartoon violence.

"The Good, The Bad And The Weird" by Yojimbo

A petty thief stumbles upon a map whilst robbing a train and sets off to retrieve the treasure with a cold blooded assassin, a bounty hunter, a gang of outlaws and the Japanese army in pursuit. The Good The Bad The Weird despite its title has little in common with Leone's film. It's far more of an out and out action film, spending little time bothering to flesh out the back story of the characters and the plot is really just a long chase punctuated by over the top shoot outs. What it is, is a lot of fun; the charismatic leads are always engaging to watch and the lighthearted blend of comedy and action has far more in common with the likes of Indiana Jones than The Man With No Name. I personally would have liked to have seen more of "the good", the laconic bounty hunter was for me the …

No posts have been made on this movie yet. Be the first to start talking about Good, the Bad, the Weird, The ( Joheunnom nabbeunnom isanghannom )!