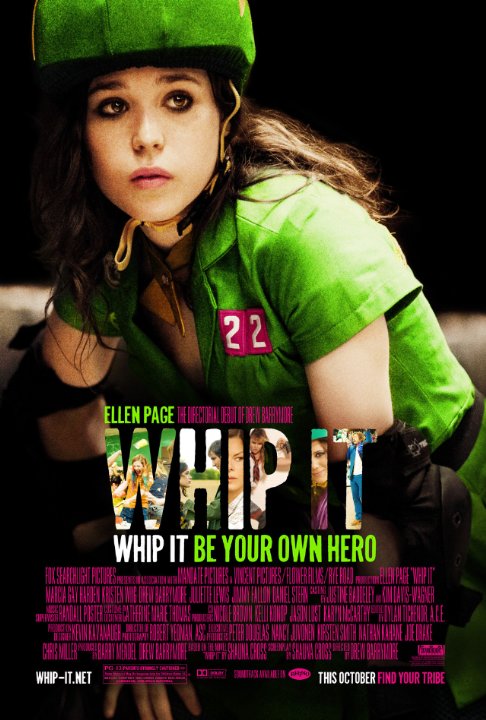 Plot: An outcast in the small town of Bodeen, Texas finds an outlet for herself when she joins a roller derby team in Austin. -- Chris Kavan

The conventional underdog sports pic, but with a fresh feminist spin.

A cute movie that I can watch over and over again, It never gets old. It also shows that you should never give up on your dreams no matter how hard the show is. She dreams to be a roller girl, It shows how the game is played and her mother wanted her in beauty pageants.

I really didnt expect to like Whip It as much as I did & I even watched it twice back to back.Awesome flick

An okay movie. The story of a girl identifying with a roller derby team is unique enough, even though we're not really told what it is about roller derby that would make a meek outcast find herself. Kristen Wiig and Juliette Lewis a pretty solid as the leaders of their respective teams, and Marcia Gay Harden as an overbearing mother (and Daniel Stern as an aloof father) are great as the parents. Ellen Page is good as well, even if she tries a little too hard at the beginning to be awkward. While Drew Barrymore is fine as a director, she probably would have been better off casting someone else in her role, as she's more annoying than anything. Also, the subplot of Page falling for some rocker dude goes nowhere and really slows things down. Good roller scenes.

Let me tell you this, if it weren't for the circumstances, I certainly would have missed out on this movie primarily because it wasn't in the genre that I'm a huge fan of. The circumstances are that it was my mom and dad's 25th wedding anniversary, and my dad was actually in this movie. Not much of a debut considering that he was really just an extra in the beginning of the film. Anyway, the movie is based on a girl named Bliss Cavendar who is a misfit in her town of Bodeen, Texas who doesn't know where she wants to take her life. She's pushed into winning beauty pageants but isn't really feeling it to be all that enjoyable. At one point though, she discovers roller derby, which she tries out for her own, and now becomes part of a roller derby team to bring her into an underdog story of …

No posts have been made on this movie yet. Be the first to start talking about Whip It!!