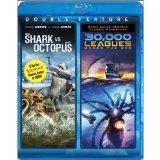 This movie is the best terrible movie you will see in 2009! With stars like Deborah (not Debbie) Gibson and Lorenzo Lamas how can you not go wrong. But the real stars of this movie are the Mega Shark and Giant Octopus, they reek havoc all over the world after being unfrozen in a non-descript military experiment. Really in the end this movie every thing Mega Sharks, Giant Octopus, the golden gate bridge, oil rigs, planes and subs all being destroyed and a compelling (if not amazingly written) love story. If you have 88 minutes and nothing to do and feel like laughing give this movie a try. I will advice that it is not worth buying or wasting a spot in your Netflix cue on this is a must watch for the Netflix streaming or waiting ,what i can only assume to be the few short weeks,for …

Movies from 2009 I've seen by Corndog

My DVD Films by Danny

No posts have been made on this movie yet. Be the first to start talking about Mega Shark vs. Giant Octopus!