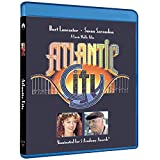 Slick and surprisingly lighthearted, this illicit caper is an underappreciated gem from the early 80s.

Fantastic performance by Burt Reynolds. This film fully captures the melancholy and broken down mood of a man past his prime.

A crime film that could be potentially interesting with a good performance and an interesting idea behind it. But the movie never really came alive for me it more of just trudged along until it ended and I did not get anything from interest or entertainment. The plot never becomes interesting and the characters never really are fully fleshed out, and the ending is just empty

"Nothings enough" says the lady on the bed named Grace. "Nice to have money to have things." - Sally. Sally trains to be a casino dealer. "Everything comes back." - Chrissie. The story revolves an elderly Lou Pascal (Burt Lancaster) who claims to have been with popular mobsters and an ambitious Sally Matthews (Susan Sarandon) who trains to become a Casino Dealer. Both meet and eat out for lunch which eventually their relationship blossoms. Men try to bother Lou and shoots them. The picture comes alive after Lou and Sally get acquainted and the murder scene. The score was applicable and performances earnest. Unfortunately, the light plot and decent direction doesn't introduce anything new to the genre or hold any interesting leads. One has a voyeur and the other a simplistic …

Top 30 Films of 1981 by CarnivorousCouch

No posts have been made on this movie yet. Be the first to start talking about Atlantic City!