Encounters at the End of the World Movie Information 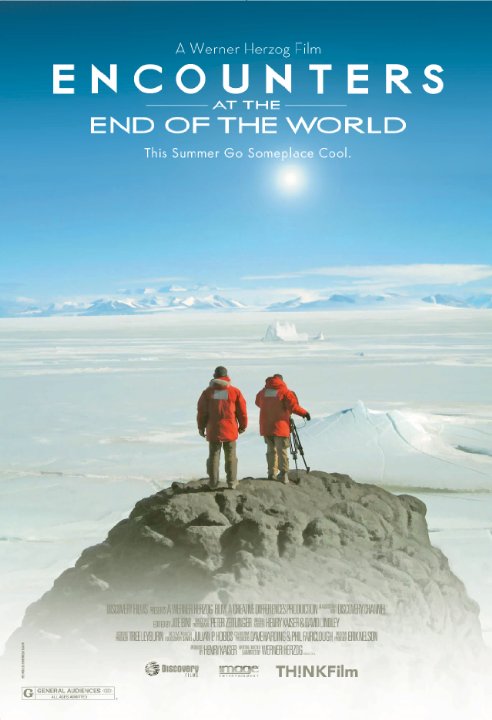 Good, but not what I was expecting

This was a Werner Herzog documentary (same guy who made/narrated "Grizzly Man") about the people and work being done at the South Pole. The music was really great and stoic and almost made the movie feel like a religious experience. The visuals were also breathtaking in their magnanimity. These were the major selling points of the movie.

I didn't like that Herzog tried to do too much and tell too many stories with very little unifying theme or thread. It seemed very scattered and aimless at times.

I also am still not a fan of scientific (or historical for that matter) documentaries without an argument. I don't find them well suited to big screen documentaries. This is probably a personal bias but I felt like this would have been better served if it were drawn out as a multi part …

One of the Most Exquisite Documentaries of 2008

Prior to watching the documentary, I expected to see strange creatures and jaw-dropping landscapes of Antarctica. What I didnât expect was fascinating human stories of those who live, work, and research that unknown continent. This film really opened my eyes; this may sound stupid but when I think of Antarctica, I think of penguins and endless desert of ice. I donât think about people actually living there for yearsânot just living there for the sake of work but actually living there because they feel like they belong there. Werner Herzog (âGrizzly Man,â âRescue Dawnâ), the director, features different kinds of people who have some kind of amazing stories tell. Their stories are so out there, so unbelievable to the point where I thought, âWow. I hope when Iâm old and …

Movies I Want To See by moviefan113

No posts have been made on this movie yet. Be the first to start talking about Encounters at the End of the World!