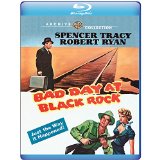 Plot: A one-handed man steps off the train in the small town of Black Rock, where the locals are less than helpful with strangers. Being refused a hotel room and a rental car - he knows the town is hiding a secret. When he mentions his purpose is to speak to a Japanese-American farmer, Kamoko, it opens up old wounds the town would rather forget - even if it means taking care of the problem with extreme force. -- Chris Kavan

A one-armed Spencer Tracy in one of the great ass-kicking roles, as he uncovers a conspiracy of silence in a small town. An intelligent examination of prejudice with yet another brilliant performance by Tracy.

A uniquely brooding mystery - more of a slow burn than a quick-paced thriller. Tracy gives a nuanced and commanding performance without losing his usual colloquial joviality.

My Top Movies of 1955 by Indyfreak

No posts have been made on this movie yet. Be the first to start talking about Bad Day at Black Rock!