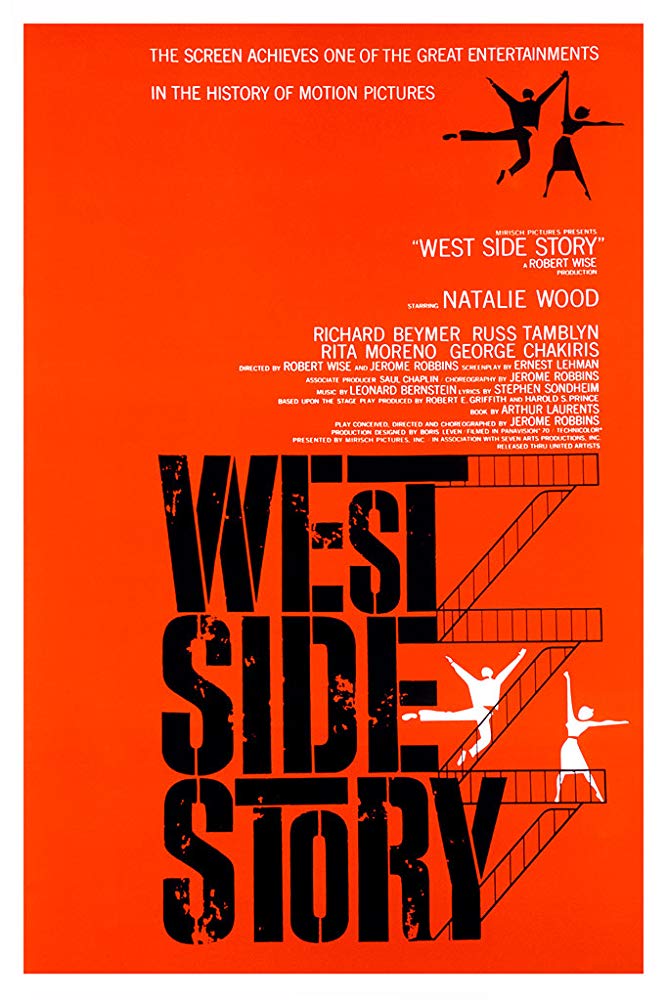 Plot: Two New York City rival gangs sing their way through battles and love as they duke it out in this 1961 best picture winner.

Stunning choreography, excellent music, and commentary on race and social class in America are what makes this film so fantastic. If the acting was less stagey it would have been greater

If you were totally fascinated by The Sound of Music, this spellbinding and beautiful Robert Wise musical will leave you humming for the songs, dancing happily the whole week, and keep you reflecting about human values, discrimination, intolerance and injustice, and about the power of friendship and equality among the world. It IS different. A musical update of the immortal classic "Romeo and Juliet" set inside the nucleus of teen gangs seemed almost reprehensible, but Wise made the wisest decision: to team up with Robbins to bring to worldwide screens an unprecedented musical that even stood out during that Golden Age of cinema. Fosse would be the next step. 90/100

Two New York City rival gangs sing their way through battles and love as they duke it out in this 1961 best picture winner. This movie has some good songs and the dancing is enjoyable but I am not really a musical guy,

West Side Story; The Classic That Never Grows Old

West Side Story, to me, is the classic that never grows old. It's my all time favorite movie, hands down, and, whether I watch it on television, or on a great big, wide screen, in a real movie theatre with the lights down low, it always feels fresh and new to me, and like I'm seeing it for the first time.

Unlike many other classics, even the other ones that I've liked well enough to see more than once and have become somewhat frayed around the edges despite being likeable, West Side Story still shines brightly 50 years later. The brilliant Bernstein musical score, the beautifully-choreographed dancing by the late Jerome Robbins, the wonderful cast (except Richard Beymer is somewhat weak and lacklustre as Tony), as well as the richly colored costumes and photography, and the very …

âWest Side Storyâ is pretty much an updated version of âRomeo and Juliet.â Instead of Montagues vs. Capulets, itâs the Sharks vs. the Jets, Puerto Rican immigrants and second generation Americans, respectively. Iâm not very interested in musicals but I had to see this one because itâs considered a classic. Although I was pleasantly surprised with how well-made it was, I was also disappointed because itâs not very consistent in its quality. After it delivers one great scene, a pointless and aimless scene comes right after it, which balances out into mediocrity. Although the songs are memorable and some even made it to the modern media consciousness, there were some musicals numbers that tried to do too much. For instance, in one shot the characters are singing in a …

In a musical modernization of Shakespeare's Romeo and Juliet, Tony (Richard Beymer) and Maria (Natalie Wood) are two teenagers associated with rival gangs in the streets of New York City. While the hatred between rivals grows, so does the love between Tony and Maria in the Best Picture winning film, "West Side Story."

I have always thought Romeo and Juliet was easily Shakespeare's best work, and because of this I expect it to get the respect it deserves. West Side Story gives this respect. The story plays out just as it does in its source material, but in a modernized manner that really works. Everything plays together very believably in today's (or at least that of the 1960s) society.

The acting is great and the music is fantastic. The only problem I have with the film is the …

West Side Story, imo, is a film that I never get tired of watching over and over again, whether it be on a great big, wide screen, in a real movie theatre, with the lights down low, or on television. &amp;nbsp;Many people with elaborate, expensive home-theatre systems claim, however, that the experience of watching a great classic film such as West Side Story on such an elaborate home entertainment system is just like seeing it in a real movie theatre. &amp;nbsp;I could not disagree more with that &hellip;