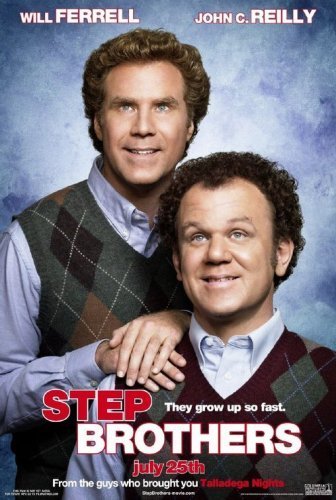 Plot: A comedy about two men who have a lot of growing up to do. After being spoon fed their whole lives, their single parents meet, date, and later get married. This forces the two brothers to move in with each other. With little intelligence and a lot of competitiveness they both try to out do each other. That is, until one day they realize that they're best friends.

The story is about two men who have a lot of growing up to do. After being spoon fed their whole lives, their single parents meet, date, and later get married. This forces the two brothers to move in with each other. With little intelligence and a lot of competitiveness they both try to out do each other. That is, until one day they realize that they're best friends. This movie has so stupid scenes and also some funny scenes.

A lot of crazy over-the-top humor, but unfortunately there about as many stupid moments as well. Ferrell and Reilly are alarmingly convincing. A good laugh.

Some funny parts and an overall genuine heart, but there are also large sections where the actors are allowed to riff that meander and aren't as focused.

I've only watched Step Brothers 2 times, when it 1st came out & just now.The 1st time I didn't enjoy it as much as I did Talladega Nights.Watching it now I wonder, What was wrong with me!? I enjoyed it from start to finish (I watched the rated version & I can't wait to see it unrated) Step Brothers was AWESOME!!! I either laughed or smiled the entire movie.If somebody asked me what my favorite part was, I couldn't tell them.I loved it all.I bought Talladega Nights when it 1st came out & if I knew back then what I know now, I would've added it to my collection a long time ago.Would I recommend this movie? MOST DEFINITELY!!! If you haven't seen it already, What are you waiting for? Buy it, Rent it, (It's worth the $$$) or however you're able to see it.If you're able to see it for free, …

Doesn't Do Reilly and Ferrell Justice

There were some funny parts in this movie, but there were also parts that dragged on and werenât as funny as it could have been. The backstory is interesting enough: two guys in their forties acting like a duo of eight-year-olds as they drive their newlywed parents crazy. Even though itâs a bit creepy at times because of their actions that should make one question their psychology, thereâs some solid material that pops up once in a while that are laugh-out-loud funny. But more than half of the time, instead of showing us an organic comedy, it all feels too forced. Therefore, it made me wonder if the filmmakers had enough confidence with the material. If they doubt, I donât buy; and if I donât buy, why should I be invested in these characters? I like Will Ferrell and John C. …

Chalk up another bad one from Ferrel and Co.

Will Ferrel continues his string of mediocre comedies with the Judd Apatow produced Step Brothers. After Dr. Robert Doback (Richard Jenkins) and Nancy Huff (Mary Steenburgen) get married, their 40 year old children (Ferrell and Reily) are forced to live together, weather they like it or not. As the film moves at its deliberate pace the brothers, who at first are enemies, form an unlikely bond as they face the inevitability of adulthood.

The performances from the cast are solid. Will Ferrel, though not doing much different than from his other films turns in a good performance alongside fellow Talladega Nights co-star John C. Reily. Richard Jenkins shines as the father of Reily, making the best of what he's given as he did in Fun with Dick and Jane. However, I'm sad to report good …

No posts have been made on this movie yet. Be the first to start talking about Step Brothers!