"Top Gun: Maverick" (2022) After more than 30 years of service as a top naval aviator, Pete âMaverickâ Mitchell (Tom Cruise) is where he belongs, pushing the envelope as a courageous test pilot. Yet, Maverick must confront the ghosts of his past when he returns to TOP GUN to train a group of elite graduates and comes face-to-face with Lt. Bradshaw (Miles Teller), the son of his former wingman, âGooseâ. Bitter rivalries ignite as the pilots prepare for a specialized mission, which will require the ultimate sacrifice from those chosen to fly it. 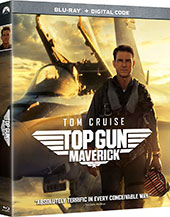 If the entire world is bad, why shouldnât we be? In "Daisies" (1966 - Czechoslovakia), adopting this insolent attitude as their guiding philosophy, a pair of hedonistic young women (Ivana KarbanovÃ¡ and Jitka CerhovÃ¡), both named Marie, embark on a gleefully debauched odyssey of gluttony, giddy destruction, and antipatriarchal resistance, in which nothing is safe from their nihilistic pursuit of pleasure. But what happens when the fun is over? 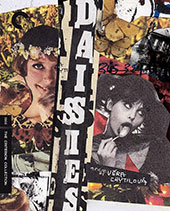 Matching her anarchic message with an equally radical aesthetic, director Vera ChytilovÃ¡, with the close collaboration of cinematographer Jaroslav Kucera, unleashes an optical storm of fluctuating film stocks, kaleidoscopic montages, cartoonish stop-motion cutouts, and surreal costumes designed by Ester KrumbachovÃ¡, who also cowrote the script. The result is Daisies, the most defiant provocation of the Czechoslovak New Wave, an exuberant call to rebellion aimed squarely at those who uphold authoritarian oppression in any form. In a Blu-ray debut, with new 4K digital restoration, with uncompressed monaural soundtrack. From The Criterion Collection. Read more here.

"Honk for Jesus, Save Your Soul" (2022), starring Regina Hall, Sterling K. Brown, Austin Crute and Nicole Beharie, is a satirical comedy starring Hall as Trinitie Childs - the proud first lady of a Southern Baptist megachurch, who together with her husband Pastor Lee-Curtis Childs (Brown), once served a congregation in the tens of thousands. But after a scandal forces their church to temporarily close, Trinitie and Lee-Curtis must reopen their church and rebuild their congregation to make the biggest comeback that commodified religion has ever seen. On DVD, Blu-ray, from Universal ... In 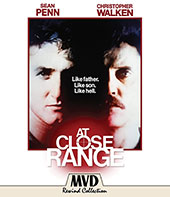 "At Close Range" (1986), a teenage farm boy looking for excitement finds himself on a collision course with his smooth-talking gang leader father in this tale based on the story of real-life killer Bruce Johnston. Oscar-winner Sean Penn and Oscar-winner Christopher Walken star in this horrifying saga of an American criminal family. Juvenile delinquent Brad Whitewood, Jr. (Penn) knows about petty theft, but he wants big money - enough to blow the lid off his boring life, enough to get out of town and to find his ol' man (Walken). He wants to be like his dad, a big-time thief, who knows "the business." Seductive and sinister, Brad's father is full of toxic wisdom that makes his illicit life appear eerily sexy. But when Brad witnesses his father deliberately killing someone, he realizes he may not only be in over his head ... he may also lose it for good. Co-stars Candy Clark, Stephen Geoffreys, David Strathairn, Kiefer Sutherland, Christopher Penn, Crispin Glover, Mary Stuart Masterson and Tracey Walter. On Blu-ray from MVD Rewind Collection ... In "Hex" (2022), starring Kayla Adams, Matthew Holcomb and Bryan David Roberts, six extreme thrill-seekers get more excitement than they can handle in this intense, pulse-pounding action-horror tale. Loner Sarah joins a team of skydivers to help them execute a dangerous formation jump called âThe Hex,â ignoring warnings that the act may be cursed. While successfully performing the stunt, one of the jumpers vanishes into thin air. Later, as the survivors search for him, surreal and deadly events afflict each of them in turn â but will Sarah likewise succumb to the wrath of The Hex? From Lionsgate.

In "The Good Boss" (2022 - Spain), Academy Award Winner Javier Bardem stars as Blanco, proprietor of BÃ¡sculas Blanco, a Spanish company producing industrial scales in a provincial Spanish town, which awaits the imminent visit from a committee that will decide if they merit a local Business Excellence award: everything has to be perfect when the time comes. Working against the clock, Blanco pulls out all the stops to address and resolve issues with his employees, crossing every imaginable line in the process. On DVD, Blu-ray, from Cohen Media Group ... "Summer Ghost" (2021 - Japan) An urban legend says that lighting fireworks at an abandoned airfield will beckon the âsummer ghost,â a spirit that can answer any question. Three teenagers, Tomoya, 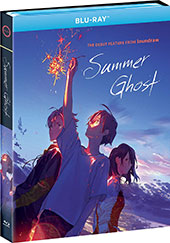 Aoi, and Ryo, each have their own reason to show up one day. When a ghost named Ayane appears, she reveals she is only visible to those âwho are about to touch their death.â Compelled by the ghost and her message, Tomoya begins regularly visiting the airfield to uncover the true purpose of her visits. Inspired by one of his own drawings, the directorial debut from the celebrated Japanese illustrator loundraw brings his lush visual sensibility to a supernatural drama about the pains of growing up, and the importance of living life to the fullest. On Blu-ray, from GKIDS/Shout Factory ... "Two Films by Patrice Leconte: Felix and Lola & Love Street:" "Felix and Lola:" (2001) Bumper car operator Felix (Philippe Torreton) falls in love with Lola (Charlotte Gainsbourg) one night as she rides the cars round and round, alone. He's touched by the sadness in her eyes. When she vanishes, he discovers that she's tied to a mysterious past - a past that he will have to confront. How far will he go to set her free? "Love Street" (2002) In 1945 Paris, the Oriental Palace brothel is about to be closed down. Marion (Laetitia Casta) is one of the Palace's prostitutes, but she dreams of a singing career. Petit Louis (Patrick Timsit) was raised in brothels and is the Palace's handyman. He is madly in love with Marion, but knows she will never be his, so he tries to make her dreams of another life come true. On DVD, Blu-ray, from Cohen Film Collection.

"Loving Highsmith" (2022)is a unique look at the life of celebrated American author Patricia Highsmith based on her diaries and notebooks and the intimate reflections of her lovers, friends and family. Focusing on Highsmithâs quest for love and her troubled identity, the film sheds new light on her life and writing. Most of Highsmithâs novels were adapted for the big screen; the best known of these are "Strangers on a Train" and "The Talented Mr. Ripley." "Carol," a partly autobiographic novel, was the first lesbian story with a happy ending to be published in 1950s America. But Highsmith herself was forced to lead a double life and had to hide her vibrant love affairs from her family and the public. Only in her unpublished writings did she reflect on her private life. Excerpts from these notes voiced by Gwendoline Christie, beautifully interwoven with archival material of her and her most famous novel adaptations, create a vivid, touching portrait of one of the most fascinating female writers. From Zeitgeist Films.

"Euphoria: Seasons 1 and 2" (2019-22) is a five-disc set with all 15 episodes plus the 2 special episodes that bridge seasons 1 and 2. Multimedia superstar Zendaya stars in this HBO drama series that follows a group of high-school students as they navigate a mine field of drugs, sex, identity, trauma, social media, love and friendship in today's increasingly unstable world. On DVD, Blu-ray, from Warner.