THIS WEEK'S BEST BETS:
One of the most innovative and influential films of the silent era, Dziga Vertovâs "Man With a Movie Camera" (1929) utilizes rapid editing and innumerable other cinematic effects to create a work of amazing modernity and power. This dawn-to-dusk view of urban Soviet life shows people at work, at play, and at the machines that endlessly whirl to keep the metropolis alive. It was Vertovâs first full-length film, and it employs all the cinematic techniques at the directorâs disposal -- dissolves, split-screens, slow-motion, and freeze-frames -- to produce a work that is as exhilarating as it is intellectually brilliant. Restored by the British Film Institute, Man With a Movie Camera features an orchestral score composed and conducted by Michael Nyman ("The Piano"), first performed on May 17, 2002 at Londonâs Royal Festival Hall. On Blu-ray from Kino Lorber ... 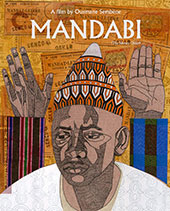 "Mandabi" (1968), the second feature by Ousmane SembÃ¨ne, was the first movie ever made in the Wolof language â a major step toward the realization of the trailblazing Senegalese filmmakerâs dream of creating a cinema by, about, and for Africans. After jobless Ibrahima Dieng receives a money order for 25,000 francs from a nephew who works in Paris, news of his windfall quickly spreads among his neighbors, who flock to him for loans even as he finds his attempts to cash the order stymied in a maze of bureaucracy, and new troubles rain down on his head. One of SembÃ¨neâs most coruscatingly funny and indignant films, "Mandabi" â an adaptation of a novella by the director himself â is a bitterly ironic depiction of a society scarred by colonialism and plagued by corruption, greed and poverty. On DVD, Blu-ray, with new 4K restoration, with uncompressed monaural soundtrack on the Blu-ray. From The Criterion Collection.

In "Faceless" (2021), starring Brendan Sexton III, Alex Essoe, Terry Serpico and Richard Haylor, after waking up disoriented and frightened in a hospital room, George (Sexton) discovers that he has received a full face transplant. Following the initial shock of an unfamiliar face, George becomes plagued by vivid, unexplainable flashbacks. Shortly thereafter, he is released from the hospital and expected to fend for himself without any recollection of his previous life. With no end in sight and nobody to turn to but a mysterious woman named Sophie, George must overcome his flashbacks, unexplained daily occurrences and a persistent, masked stalker to put the pieces together before itâs too late. From Indican Pictures ... 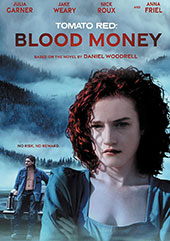 In "Tomato Red: Blood Money" (2021), starring Julia Garner, Jake Weary, Nick Roux and Anna Friel, when small town drifter Sammy Barlach (Weary) drives into town on the search for his next cold beer, he gets a lot more than he originally bargained for. Thanks to redheaded Jamalee (Garner) and her brother, Jason (Roux), who dream of hitting the big time, Sammy receives food, lodging and the possibility of a better future -- but itâs not long before he realizes that breaks donât come easily in a small town like Venus Holler. Soon, the trio finds themselves powerless against the forces of corruption and prejudice, and Sammy must begin the fight of his life. From Indican Pictures ... In "Butchers" (2021 -- Canada), starring Simon Phillips, Michael Swatton, Julie Mainville and Anne-Carolyne Binette, a family of sadistic butchers has dug into the back country and, from the deep freeze of winter to the dog days of summer, anyone who crosses their path is dead meat. A group of stranded friends must fight to survive the attacks of the brutal brothers. From Breaking Glass Pictures ... In "Archenemy" (2020), starring Joe Manganiello, Skylan Brooks, Zolee Griggs, Paul Scheer, Amy Seimetz and Glenn Howerton, Max Fist (Manganiello) is a local drunk who claims to be a superhero from the planet Chromium. He tells anyone who will listen that he was pulled into a wormhole, falling through time and space, and dropped to earth without any of his powers. No one pays any 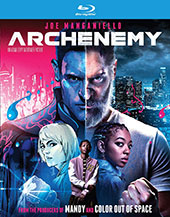 attention to Max except a teenager named Hamster (Brooks) who can't get enough of Max's stories. When Hamster and his sister (Griggs) get in trouble with a vicious drug syndicate led by The Manager (Howerton), Max takes to the streets as a brutal vigilante hellbent on proving himself as the hero no one believes him to be. On DVD, Blu-ray. from RLJE Films ... In "Random Acts of Violence" (2021), starring Jesse Williams, Jordana Brewster, Niamh Wilson and Jay Baruchel, comic book creator Todd Walkley, his wife, assistant and best friend, are heading to NYC Comic Con when bad things start to happen â- people start getting killed. It soon becomes clear that a crazed fan is using his âSLASHERMANâ comic as inspiration for the killings. And as the bodies pile up, and Toddâs friends become victims themselves, he is forced to face the killer and put an end to his notorious comic once and for all. On DVD, Blu-ray. From RLJE Films ... In "A Call to Spy" (2019), starring Sarah Megan Thomas, Stana Katic and Radhika Apte, just at the beginning of WWII, with Britain becoming desperate, Prime Minister Winston Churchill orders his new spy agency - SOE - to recruit and train women as spies. On DVD, Blu-ray, from Universal ... In "Horizon Line" (2020), starring Alexander Dreymon, Allison Williams, Keith David, Pearl Mackie, Jumayn Hunter and Lamin Tamba, former couple Sara and Jackson 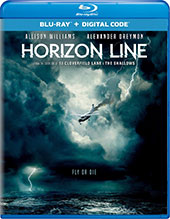 board a single-engine plane for a routine and casual flight to their friend's tropical island wedding. However, within minutes of takeoff, their pilot suffers a fatal heart attack, leaving them with no idea where they are, and no clue how to land the plane. With nothing but miles of ocean and sky in every direction, and a terrifying storm that's about to envelop them, Sara and Jackson have only one shot -- and there's no going back. On DVD, Blu-ray with digital code, from Universal ... A few days after Christmas, half-sisters Ida and Tuva set out on a winter dive in a remote part of the Norwegian coastline in "Breaking Surface" (2019 -- Sweden-Belgium-Norway), starring Moa Gammel and Madeleine Martin. Towards the end of the dive, a rockslide traps Tuva under water. As Ida surfaces to call for help, she discovers that the rockslide has struck above water as well, burying their equipment, phones and car keys -- they are completely cut off from any chance of rescue. As the frantic race for survival unfolds, Ida is put to the ultimate test of character and forcefulness. On DVD, Blu-ray, from Doppelganger Releasing ... In "The Informer" (2019 -- UK), starring Joel Kinnaman, Ana de Armas, Rosamund Pike, Clive Owen, Sam Spruell, Martin McCann and Jenna Willis, an ex-convict working undercover intentionally gets himself incarcerated again in order to infiltrate the mob at a maximum security prison. On DVD, Blu-ray, from Lionsgate.

In "Things Don't Stay Fixed" (2021), starring William Gregory Lee, Melissa Saint-Amand, Tara Ochs and Brenda Bynuma, worldly photojournalist Sam Grace (Lee) returns home to the Deep South in an attempt to stop his daughter, Nina, from marrying and destroying her future. Samâs return home becomes more telling as he discovers that heâs the one that has been stuck in the past all along. From Indican Pictures.

"AK-47: Kalashnikov" (2020 -- Russia), starring Yuriy Borisov, Artur Smolyaninov, Maksim Bityukov, Valery Barinov, Vitaliy Khaev and Aleksey Vertkov, is set on the Eastern Front in 1941, where young tank commander Mikhail Kalashnikov is seriously wounded in battle. Unable to work and with no prospect of returning to the front, yet eager to continue to help his country, he begins developing designs for a more robust, effective and reliable assault rifle. With the help of a few train welders, Kalashnikovâs first prototype catches the 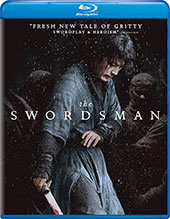 interest of a high-ranking military official. This opens the first of many doors for Kalashnikov for the world's most advanced and reliable weapon - the AK-47. From Capelight Pictures ... "The Swordsman" (2020 -- South Korea), starring Jang Hyuk, Kim Hyeon-soo, Joe Taslim and Jeong Man-sik, is a hybrid of mainstream historical drama and traditional martial arts action. After failing to protect and prevent the downfall of the King, the best swordsman in Joseon leaves and lives in seclusion with his daughter in the mountains. As his eyesight begins to fail due to an old injury, his daughter seeks to find a treatment for him. When she is captured and taken away by a slave trader, the swordsman is forced to raise his sword again in order to save her. On DVD, Blu-ray, from Well Go USA.

"Filmworker" (2017): Leon Vitali was a rising British television actor when Stanley Kubrick picked him for the role of Lord Bullingdon in "Barry Lyndon." That first encounter with the famed auteur proved decisive -- he swiftly resolved to devote the rest of his life working for the director, this time behind the scenes, and took on just about every job available: casting director, acting coach, location scouter, sound engineer, color corrector, A.D., promoter, and eventually restorer of Kubrickâs films. Tony Zierraâs affecting documentary profiles the devoted âfilmworkerâ -- Vitaliâs preferred job title -- as he enthusiastically recounts his days with the notoriously meticulous, volatile and obsessive director. The experiences brought both tremendous sacrifice and glowing pride. "Filmworker" celebrates the invisible hands that shape masterpieces, reminding us that behind every great director, there is a Leon Vitali. On Blu-ray from Kino Lorber.

In Season 2 of the Finnish Nordic Noir hit "Bordertown Season 2" (2018 -- Finland), chief investigator Kari Sorjonen of the Serious Crimes Unit deals with a variety of harrowing homicides on the border between Finland and Russia. Each of these murder cases takes the viewer on a journey into humanityâs dark underbelly, in which no one will be able to escape their past. On Blu-ray from Kino Lorber ... "Lovecraft Country: The Complete First Season" (2020) is a three-disc set with all 10 episodes of the HBO series. Based on the 2016 novel by Matt Ruff, "Lovecraft Country" follows Atticus Freeman (Jonathan Majors) as he joins up with his childhood friend Leti Lewis (Jurnee Smollett) and his Uncle George (Courtney B. Vance) to embark on a road trip from Chicago across 1950s Jim Crow America in search of his missing father, Montrose Freeman (Michael K. Williams). Their search-and-rescue turns into a struggle to survive and overcome both the racist terrors of white America and monstrous creatures that could be ripped from an H.P. Lovecraft paperback. On DVD, Blu-ray, from Warner.