THIS WEEK'S BEST BETS:
The Poverty Row, Pre-Code marvel "The Sin of Nora Moran" (1933), that stunned audiences when released in 1933, stars Zita Johann as Nora Moran, a young woman sentenced to death for a murder she did not commit. Awaiting her sentence, Nora explores the patterns of her life in a dream-like haze, including the dark secret that could change not only her own fate, but the fate of those she holds most dear. Directed by Phil Goldstone, "The Sin of Nora Moran 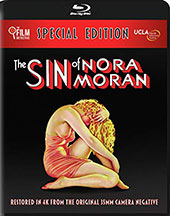 masterfully utilizes flashbacks, dreams and hallucinations to tell the tale of fateful doom, true to the thematic style of the Pre-Code era. New, 4K restoration of the film from the original 35mm camera negative; the DVD is presented in Dolby Stereo and the Blu-ray in DTS, a restored, dual mono original. The release is in collaboration with film historian and producer Sam Sherman and the Independent-International Pictures team and the UCLA Film and Television Archive. On DVD, Blu-ray (in a special, limited-edition collectible with only 1,500 available), from The Film Detective.

For her entire life, the cult she was born into has been all that teenage Selah has known in "The Other Lamb

" (2019), starring Raffey Cassidy and Michiel Huisman. Along with a band of similarly cloistered young women she lives seemingly unstuck in time, cut off from modern society in a remote forest commune presided over by a man called Shepherd, a controlling, messiah-like figure with a frightening dark side. But when her insular world is rocked by a series of nightmarish visions and disturbing revelations, Selah begins to question everything about her existence including her allegiance to the increasingly dangerous Shepherd. On DVD, Blu-ray, from IFC Films ... 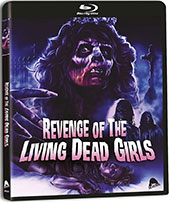 In 1987, Parisian pornographers Pierre B. Reinhard and Jean-Claude Roy deviated from their usual high-end skin fare to instead create un cassoulet dâatrocitÃ©s that remains the most extreme French gore film in history. When a trio of vixens is killed by corporate-tainted milk in "Revenge of the Living Dead Girls

" (2019), starring Heston Horwin, Jillian Harris, and Matt Keyes, is a psychological horror/sci-fi film about a young man's attempts to kill himself, only to find himself constantly reborn. When Becky, a young nursing student, receives a series of panicked messages from her suicidal older brother, Richie, she rushes over to check on him. When she gets to his apartment, she finds him alive and well-surrounded by copies of his own dead body. On DVD, Blu-ray, from Artsploitation Films ... 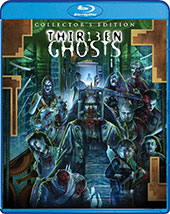 " (2001), starring Tony Shalhoub, Embeth Davidtz, Matthew Lillard, Shannon Elizabeth, Rah Digg and F. Murray Abraham, is a modern remake of the 1960 classic. When Cyrus Kriticos, a very rich collector of unique things dies, he leaves it all to his nephew and his family. All including his elegant steel-and-glass mansion, his fortune, and his malicious collection of ghosts that can be seen only through special goggles. In a Collector's Edition Blu-ray debut from Scream Factory ... A decade ago, agent Martin Baxter quit MI6 after his wifeâs tragic murder in an operation gone wrong in "Legacy of Lies

" (2019), starring Scott Adkins, Honor Kneafsey and Andrea Vasiliou. But when Sacha, a beautiful journalist, asks for help solving an old case, Martin finds himself in the crosshairs of both UK and Russian intelligence. Now, with his daughter held captive by the KGB, Martin has just 24 hours to deliver the secret case files â which means risking both Sachaâs life and his own. From Lionsgate. 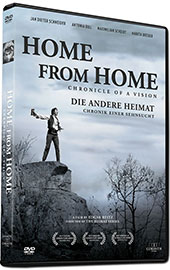 "Home From Home: Chronicle of a Vision

" (2013 -- Germany) is a sweeping black & white prequel to celebrated filmmaker Edgar Reitz's landmark "Heimat" series. In the mid-19th century, hundreds of thousands of Europeans emigrated to faraway South America. It was a desperate bid to escape the famine, poverty and despotism that ruled at home. Reitz -- who just received a Lifetime Achievement Award at the 2020 German Film Awards --chronicles a domestic drama and love story set against the backdrop of this forgotten tragedy. The film is centered around two brothers who realize that only their dreams can save them. Stars Jan Dieter Schneider, Antonia Bill and Maximilian Scheidt. From Corinth Films.

"James Cameronâs Story of Science Fiction" (2018) takes a uniquely intimate look at science fiction's roots, futuristic vision and our fascination with its ideas through interviews by host James Cameron with A-list storytellers, stars and other whose careers have defined the field, including Steven Spielberg, George Lucas, Ridley Scott, Christopher Nolan, Arnold Schwarzenegger, Will Smith and Sigourney Weaver, among many others. Cameron takes us on a journey of discovery and exploration, helping us understand where science fiction's ideas came from - and where they're taking us. A six-episode miniseries. On DVD, Blu-ray, from RLJE Films ... 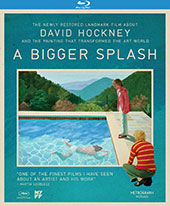 " (1974) is an intimate and innovative film about English-born, California-based artist David Hockney and his work, honoring its subject through creative risk-taking. Director Jack Hazan creates an improvisatory narrative-nonfiction hybrid featuring Hockney, a wary participant, as well as his circle of friends, capturing the agonized end of the lingering affair between Hockney and his muse, an American named Peter Schlesinger. The result is at once a time capsule of hedonistic gay life in the 1970s, an honest-yet-tender depiction of gay male romance that dispenses with the then-current narratives of self-hatred and self-pity, an invaluable view of art history in action, and a record of artistic creation that is itself a work of art. On DVD, Blu-ray, from Metrograph Pictures ... "An Accidental Studio 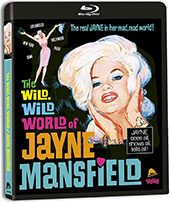 the eyes of the filmmakers, key personnel, and the man who started it all: former Beatle George Harrison. With unreleased archive interviews and footage with Harrison, exclusive interviews with Michael Palin, Terry Gilliam, Richard E. Grant, Neil Jordan, Ray Cooper and unseen interviews with Bob Hoskins, the film explores HandMadeâs baptism by fire, the risk it took in producing uniquely crafted intelligent films and the stories that grew up around it. On DVD, Blu-ray, from RLJE Films "The Wild, Wild World of Jayne Mansfield

" (1968) is the notorious Mondo mash-up documentary in which a Jayne Mansfield sound-alike narrates footage of Jayne being chased by paparazzi in Rome, wearing bikinis in Cannes and partying with drag queens in Paris, before suddenly veering into graphic photos of her horrific accident and a posthumous tour of her Hollywood mansion. Mickey Hargitay co-stars in this âderanged kaleidoscope of titillating insanityâ (Film Threat), scanned from the 35mm Something Weird archival print. On DVD, Blu-ray, from Severin Films.

"Deadwater Fell" (2020) is a two-disc set with four episodes. Award-winning actor David Tennant ("Broadchurch," "Doctor Who") and award-winning actress Cush Jumbo ("The Good Fight," "Vera") lead an ensemble cast in UK Channel 4âs second highest-rating drama (total audience) in the past year. The psychological mystery explores the cause and aftermath of a horrific crime in a small Scottish community. Dr. Kendrick (Tennant) is a trusted, admired and much-liked member of the community, doting father of three, and seemingly loving husband to Kate (Anna Madeley); their lives seem nothing short from perfect. But in one night the illusions of happiness and contentment are shattered as the community rushes to Kate and Tomâs home on fire. Amid the confusion, Kate and her children are found dead, and Tom, found unconscious in his 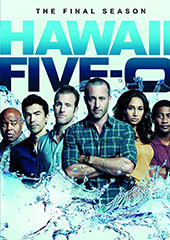 bed, is rushed to the hospital. As more suspicious details of that night emerge, Jess (Jumbo) â who was Kateâs best friend and closest confidante â becomes desperate to understand what could have caused such a tragedy, and what secrets lie at the root of this terrible act. From Acorn Media ... "Hawaii Five-0: The Final Season" (2019-20) is a five-disc set with all 22 episodes. The Aloha State's elite task force returns to wipe out crime on the Hawaiian Islands one last time. In the 10th and final season, Lieutenant Commander Steve McGarrett (Alex O'Loughlin) and the Five-O find themselves reeling from the shots fired at the headquarters. After the smoke clears, McGarrett recognizes a few familiar faces including his mom, Doris McGarrett (Christine Lahti), and imprisoned hacker Aaron Wright (Joey Lawrence). The elite task force soon finds allies in their quest to wipe out crime that washes up on the islands' sun-drenched beaches. Also, Thomas Magnum (Jay Hernandez) makes a special appearance in a "Magnum P.I." crossover episode. From CBS/Paramount ... "NCIS: The Seventeenth Season" (2019-20) is a five-disc set with all 20 episodes. NCIS (Naval Criminal Investigative Service) Special Agent Leroy Jethro Gibbs (Mark Harmon), a former Marine gunnery sergeant whose skills as an investigator are unmatched, leads a troupe of colorful personalities. Gibbs, a man of few words, only needs a look to explain it all. The team includes NCIS Special Agent Timothy McGee, an MIT graduate with a brilliance for computers; NCIS Special Agent Eleanor âEllieâ Bishop, a mysterious mixture of analytic brilliance, fierce determination and idealism who specializes in international threat assessment and global preparation; the charismatic, unpredictable and resilient NCIS Special Agent Nicholas âNickâ Torres, who has spent most of his career on solo undercover assignments; and NCIS Special Agent Jacqueline âJackâ Sloane, who built her reputation as the agencyâs 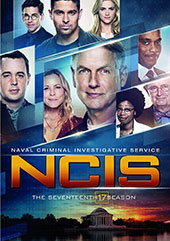 premier forensic psychologist and enjoys challenging Gibbs. From murder and espionage to terrorism and stolen submarines, these special agents investigate all crimes with Navy or Marine Corps ties. From CBS/Paramount ... "The Outsider: The Complete First Season" (2019) is a three-disc set with all 10 episodes. Based on Stephen King's bestselling novel of the same name, the drama series follows a seemingly straightforward investigation into the gruesome murder of a local boy. When 11-year-old Frankie Peterson's body is found mutilated in the Georgia woods, police detective Ralph Anderson (Ben Mendelsohn) sets out to investigate -- with eyewitnesses and physical evidence pointing to Terry Maitland (Jason Bateman), a popular high school teacher, Little League coach, doting husband and father. While the case appears ironclad, Ralph is baffled by the emergence of contradictory evidence that places his suspect in a neighboring city at the time of the murder. The mysterious set of circumstances surrounding this horrifying crime leads Ralph, a seasoned cop still grieving the recent death of his own son, to bring in unorthodox private investigator Holly Gibney (Cynthia Erivo), whose uncanny abilities he hopes will help explain the unexplainable. On DVD, Blu-ray, from HBO.