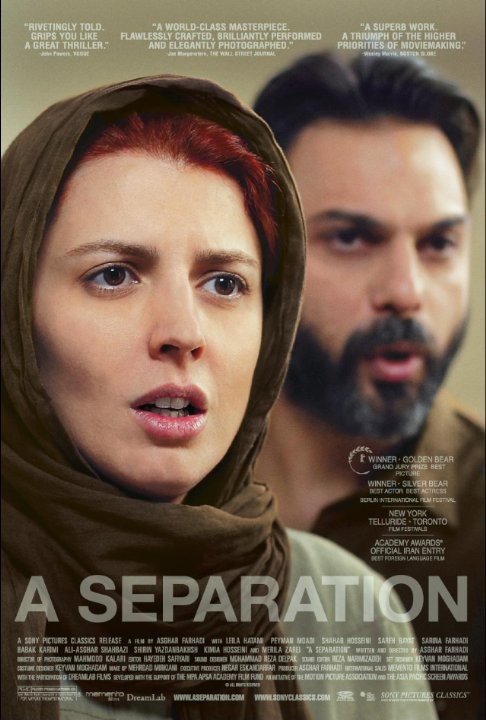 One of the best films produced in 2011 because of its flawless acting/direction. Human frailties at its finest. Nader (Peyman Moaadi) and Simin (Leila Hatami) have been married for 14 years and live with their 11-year-old daughter Termeh (Sarina Farhadi). Razieh (Sareh Bayat) was hired to look over Nader's father who has Alzheimer's disease. Things eventually go wrong when Nader discovers his father's arm being tied-up while Razieh was away. Screenplay was effective with lines from the characters: Nader - "What is wrong is wrong, no matter who said it or where it's written." "'Cause every time you face a trouble, you give in. Rather than confront it. " and Hodjat - "ou know, my problem is that I can't speak like them. I just lose my control soon." A realistic picture about lies, faith practiced, tradition, temper, protecting family, lack of responsibility, child innocence, justice and complexities of marriage. Last hour of the movie makes it more engaging than the rather slow start to build character development. Dual stories of two families were intricate yet detailed even with their justice system and beliefs. Cinematography and score brought out the intense emotions necessary to make A Separation one of the best foreign pictures on separations and decision.