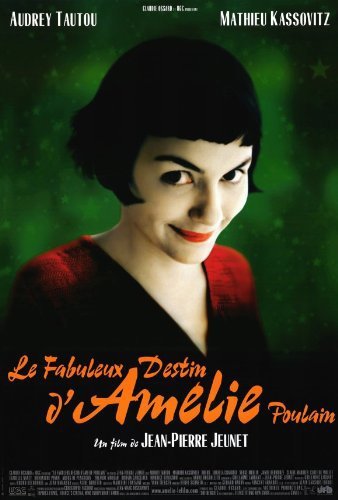 AmÃ©lie Poulain (Audrey Tautou) has one of the greatest imaginations with a sense of purpose in life and manages to get a hidden treasure from her place. She seeks help from her talented neighbor Raymond Dufayel (Serge Merlin) who paints and uses a video camera. Nino collects unwanted photos from a photo booth and manages to stay in a porno video store. She tries to be a mystery to Nino. A mystery man appears in his album, which is actually a repairman that Amelie discovered. The moment Nino and Amelie meet is precious and spectacular. Nino accidentally goes out with Gina. I noticed she was always wearing red, first time Nino contacts her she was wearing green. The picture is filled with brilliant quotes: Amelie â âIt's better to help people than garden gnomes.â Raymond â âSo, my little AmÃ©lie, you don't have bones of glass. You can take life's knocks. If you let this chance pass, eventually, your heart will become as dry and brittle as my skeleton. So, go get him, for Pete's sake!â Hipolito â âWe pass the time of day to forget how time passes.â Narrator â âA surge of love, an urge to help mankind overcomes her.â

The colors used on the movie were enchanting while the pace of the story was enticing, poetic like water flowing. Character development was magnificent, interwoven figures with various issues without confusing the female leadâs story. Its cinematography, style of direction and subjects were monumental. I cannot count the number times I was amazed and smiled with so many scenes in a film. Has good performances even from the background characters, its score was pleasing to the ears and screenplay was exceptional. Words cannot describe how this film is so impressive in terms of its subjects of parenting, making an impact, relationships and perseverance. The manner mixing the humor and drama of its figures was terrific. Amelie is a definitely one of the greatest pictures made without having any pretentions, violence, swearing or actual sex scenes which is a breath of fresh air compared to other flicks that just cash in based on their popular stars or crude scripts.