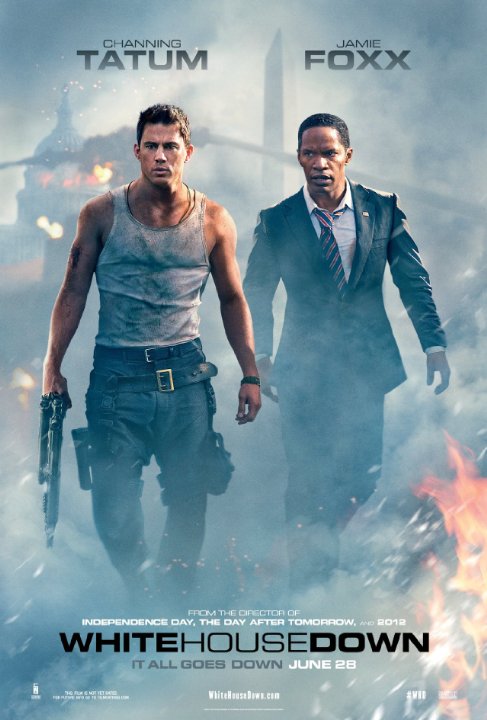 Roland Emmerich is known for huge disaster films: 2012, The Day After Tomorrow and Independence Day - films so over-the-top you could describe them as action overkill. While White House Down certainly has its completely absurdly crazy moments it's a bit more grounded than watching entire cities being destroyed Also, it helps when you have Jamie Foxx, Channing Tatum and James Woods running the show.

Action movies cannot survive on action alone - many have tried and many have failed. Where White House Down really shines is that it brings comedy and drama to the table in measured amounts - and balances things out quite well. When we open, we find that President Sawyer (Foxx) has just put forth a controversial peace plan that would bring all troops home - and it has gotten the defense contractors up in arms as they're about to lose a lot of money without a war to fight.

Meanwhile, Tatum plays a personal security guard to Speaker of the House Raphelson (Richard Jenkins) after serving for many years in Afghanistan. His daughter (a very keen Joey King) is completely infatuated with politics and the White House in particular - but he's been away so long that their relationship is not exactly healthy. But he hopes to smooth things over by providing his ace in the hole: tickets to the White House itself.

We are also introduced to outgoing head of the Secret Service, Agent Walker (Woods) - and we know early on something is going one when he removes his American Flag pin. Maggie Gyllenhaal plays another high-ranking agent, Finnerty along with Jake Weber as Agent Hope. The beginning gives us reason to care about these characters - whether it's the president doing a flyby of the Lincoln Memorial or the staff throwing a a going-away party or posing an surprisingly tough question to the president for your video blog (I'm sorry, I mean YouTube channel). It's the little touches that make you care when the explosions start up.

You see it doesn't take long for our heroes to run into some truly despicable characters. You have the disgruntled soldier (leader of the operation Jason Clarke), the tried and true hacker (Jimmi Simpson) and, of course, the insane racist redneck and other assorted nuts. Pretty much the entire group is a rogues gallery of the most watched men in American - meaning, of course, that someone on the inside has planned everything.

White House Down, despite the undertones, is not exactly a serious movie. The bad guys shoot like marksmen when they're taking over the White House, but as soon as Tatum show up, suddenly they become the aiming equivalent of Stormtroopers (that is to say, they can't hit the broad side of a barn... unless armed with missiles). Clarke's character decides holding a grudge is more important than anything else as Tatum takes out his men one by one. And the big reveal as to who is behind the whole thing isn't exactly a mystery. Yet despite the many, many tropes it marches out - I still had a lot of fun. And isn't the summer supposed to be about having fun? Let's put the dark superheroes aside and just have a blast. Plus, they blow up plenty of stuff while throwing out a ton of one-liners along the way.

This isn't going to win anybody any Oscars, but from an entertainment standpoint it made my day. In my mind it is worth the time and money and puts pretty much every other action bomb of 2013 (I'm looking at you The Last Stand and Bullet to the Head) to shame. So sit back, relax and give those brain cells a rest - this is a fun ride all the way.

Have you seen &quot;Olympus has fallen&quot; if yes, do fancy it to &quot;White House Down&quot;?