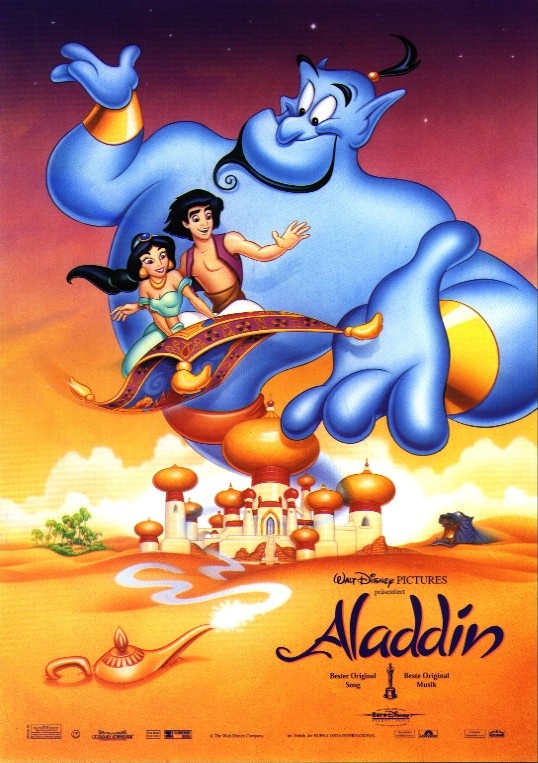 Aladdin (Scott Weinger, Brad Kane singing) was a simple street urchin before he met Princess Jasmine (Linda Larkin, Lea Salonga singing). Now, with the help of a genie (Robin Williams), he is going to try to take down the evil Jafar (Jonathan Freeman) in âAladdin.â

I still remember going to see this in theaters when I was only four years old, and I loved it back then as much as I love it now. While I donât think itâs Disneyâs greatest work, itâs definitely one of their most unique. The animation and the story are very original, even though the story is based on an old classic. The film is very much its own thing, which works wonderfully.

Unfortunately, this is when Disney started to realize the power of CGI, which they had already used in âThe Little Mermaidâ and âBeauty and the Beast,â but used much more prominently here. It looks great, but it foreshadows a horrible moment in Disneyâs recent history. Maybe Iâm just a Purist.

The music, like in almost all Disney films, is absolutely top notch. Alan Menken wrote another beautiful score that keeps the Disney way going. Iâm actually surprised they havenât figure out a way to do this one on Broadway yet, though I think it would be a tough one to do.

âAladdinâ is another of the Disney greats from the 1990âs that will most likely be a classic for many years to come, but I donât think it will be as historical as many other Disney films.