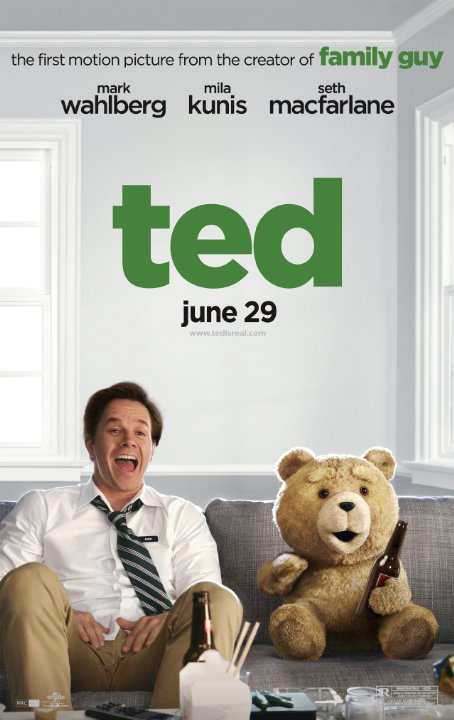 When I first saw previews for âTedâ, I immediately thought this was a blatant rip-off of FXâs series, âWilfredâ. Close, but not quite. Instead of a man-sized dog that only Elija Wood can talk to, âTedâ comes to life for all to see and interact with â most specifically his âthunder buddyâ, Mark Wahlberg. âTedâ is powered by Seth McFarlaneâs voice and comedy (if youâve ever seen TVâs âFamily Guyâ, you have an idea of whatâs in store).

The basis of the story is that young John Bennett is a loner who is ignored by his peers. Starving for a real friend, he wishes his teddy bear Christmas present could be his live best buddy. When this does come to pass, Ted initially freaks everyone out, but then quickly becomes the celebrity of the moment. As John (now Wahlberg) grows up, they continue their close relationship, much to the dismay of his long-time girlfriend, Lori (Mila Kunis). The story pretty much centers on John trying to break out of his slacker ways (which Ted continuously promotes) and making a serious commitment to Lori.

Wahlberg has had numerous roles since his Markie-Mark days, mostly serious roles such as in âThe Fighterâ, âThe Departedâ, and âMax Payneâ. He has previously shown his comedic side in stints on âSaturday Night Liveâ. In âTedâ his character is sophomoric, but well intentioned. Iâm sure it must have been hard acting against a co-star who wasnât really interactive, but he pulls it off well. Mila Kunis (âBlack Swanâ, âDate Nightâ) has done both comedy and serious roles. Her character here does come off plaintive and whiney while she hangs around hoping her boyfriend will finally outgrow âTedâ so they can move on with their own relationship.

Seth McFarlane wrote, directed and provides the personality for âTedâ. As I said, if youâve ever watched âFamily Guyâ, itâs a lot like that. With an âRâ rating, the film is mostly sexual humor and some brief nudity. There are a few surprising cameos that add to the humor along the way. Unfortunately, the story does try to play it seriously for a bit as it begins to wrap up, which doesnât fit in with the rest of the comic angles.

Overall, I thought âTedâ was funny and decent entertainment, but after viewing it, I wished they had held back a number of the funnier bits from the previews. Most of the story is quite predictable and the situations are all too familiar. You canât help but feel that âTedâ could have delivered so much more in the way of laughs.