Matthew Brady's Movie Review of Pieces of a Woman 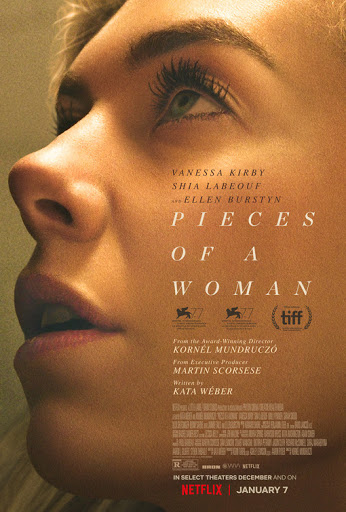 Pieces of a Woman

Man, what a movie.

Please avoid reading up any synopsis for this movie and instead go in blind if you can. However, I must warn you that this movie is a hard pill to swallow, in terms of its subject matter. Without spoiling anything, the movie is about grief and how that can affect a person and a relationship. It may be distressing for some and may leave you feeling blue, but itâs so powerful you wonât forget it. Worth seeing just for the directing, acting, and story.

I wasnât prepared for it and I think you shouldnât be too.

The movie begins with a stressful and devastating 30-minute-long scene that perfectly sets up the tone for the movie. Itâs very rare for me to say âoh sh*t!â out load while watching a movie. People have said that the movie quickly deflates after that, but I donât agree. After something as huge as that opening, the rest takes a much slower pace that effectively allows the audience to examine closely on the characters during the worst period of their lives.

Vanessa Kirby delivers a performance that I would describe as haunting. Out of all the performances Iâve seen from her (so far), this is by far her best, as this movie really showcases her range as an actor. She really sank her teeth into the role and every bit of emotion she conveyed throughout the movie, loud or quiet, was incredibly believable. From her role as Princess Margaret in the hit TV show âThe Crownâ and now this movie, I can safely say Iâm a fan of Vanessa Kirby.

The rest of the supporting cast were all equally terrific. Shia LaBeouf, despite being a controversial figure recently, also delivers a fantastic performance. It was more grounded and less showy than his other roles. Ellen Burstyn is an amazing actor, and this movie reminds us of that. The scenes between her and Kirby were the highlights of the movie. One scene reminded of Burstynâs heart-breaking monologue from âRequiem for a Dreamâ. Just from her facial expressions alone, the sadness and the worry, have implanted itself into my head.

The cinematography from Benjamin Loeb is really well shot and the camera work is almost like a character itself. There are plenty of long takes throughout the movie as the camera would sometimes flow between or around the characters, which made the scenes feel personal and real.

My only issue with the was the score from Howard Shore as I felt it was lacking in some scenes. At times I didnât think music was really needed for certain scenes. Not a terrible score by any means, but very disappointing and nothing special. And thatâs really it for issues.

Overall rating: âPieces of a Womanâ is a beautiful character-driven story that emotionally wrecked me. A hard movie to recommend for obvious reasons. Itâs a challenging movie that demands your patience as the story steadily moves along the emotional turmoil. It doesnât hold anything back when it comes to presenting the honest truth of its subject matter, but I think thatâs what made it so powerful for me. Difficult to watch, but I believe thatâs the point.