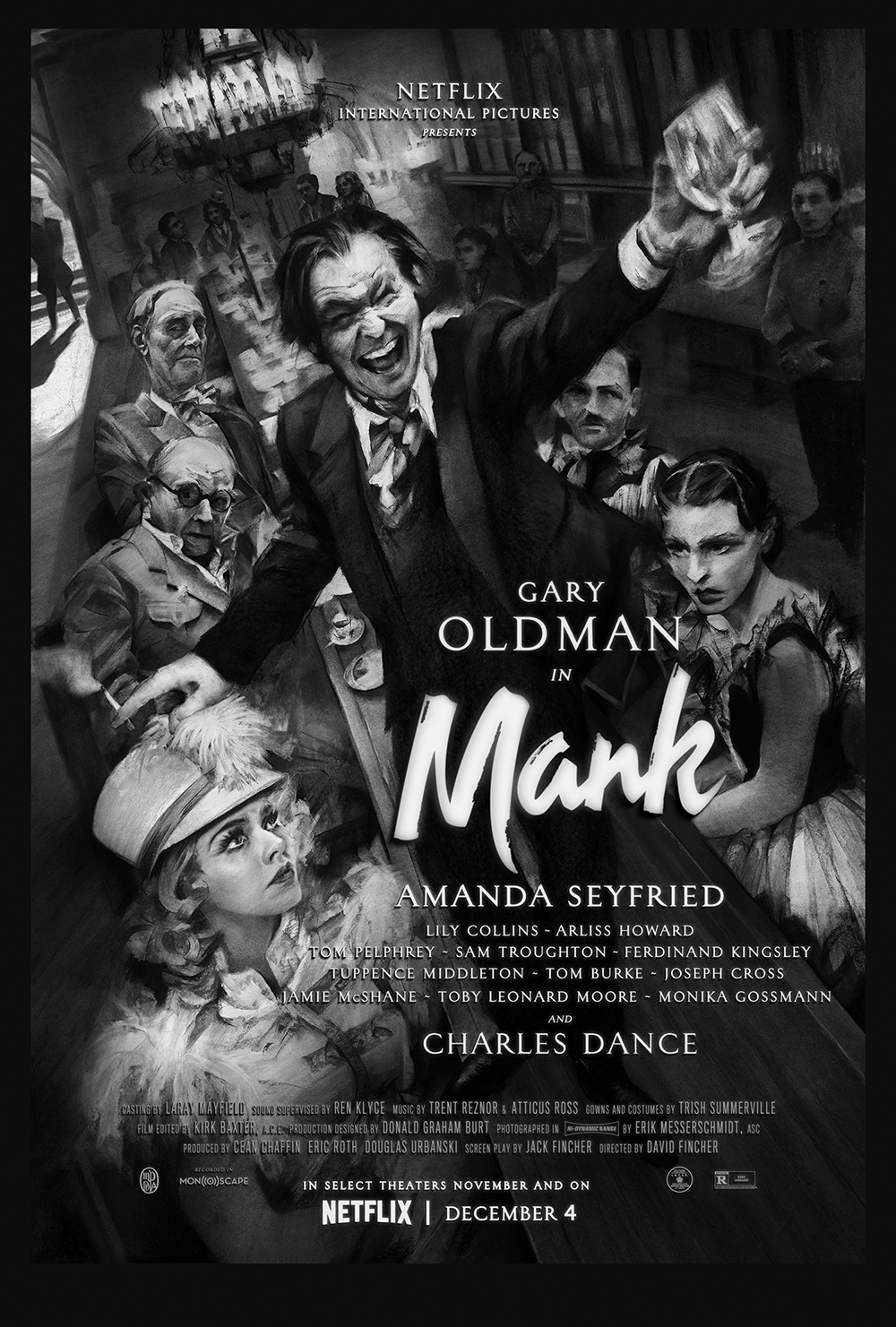 6 years without a David Fincher film, but he finally returns with an unexpected and quite polarizing movie. He returns not only with a feature film, but his sassy "hot takes".

I seem to be the odd one out here, in terms of liking this...oh fuck it.

âMankâ is absolutely mankificent! Also, my sincere apology for that unforgivable pun, I just couldnât resist. I loved the acting, the score, the directing, the writing, and I loved it even more on a second watch. A movie centered around the golden age of Hollywood that felt so classy, and yet very timely.

Timely in terms of communism and how film studios were struggling to find new ways to attract audiences back to the cinemaâs, since they recent efforts barley made a dime. I found the political and economic undertone of the story were the best part about the movie. It shows why Mank and Wells were so passionate about making "Citizen Kane", and it allows us to appreciate the film not only from a technical stand point, but for themes the creators were exploring in it. It makes you look at âCitizen Kaneâ more differently and hopefully helps us recognize the power of political narrative in popular media, and its effect on everyday life.

Itâs less about the making of âCitizen Kaneâ and more about the screen writer himself, Herman J. Mankiewicz and the ever-changing hardships that Hollywood faced in the 1930âs, way before âthe great depressionâ. This is not 100% a true story nor do I believe Fincher was aiming for that, as he instead chooses to focus more on Mankiewicz perspective, an unreliable alcoholic that blurs the line between what is true and isn't.

But firstly, I do recommend watching âCitizen Kaneâ before this movie for two main reasons:

1). To understand some of the references in the movie, both in dialogue and visual references.
2). I think you should just watch âCitizen Kaneâ if you havenât, because, um...I heard itâs pretty good.

David Fincher is somebody that I admire both as a filmmaker and as a human being. His advice on film is incredibly insightful and inspiring, but he has a personality of a punk rocker which makes him compelling to watch and listen, which all that elements always carry through into his work. With âMankâ, itâs a complete departure from Fincher's other work in terms of tone and everything else. Halfway through the movie you completely forget he directed it. There are no serial killers, no violence, and no Mark Zuckerberg. However, itâs not to say his visual style, extreme attention to detail, and humour isnât present. This is not just a love letter to Hollywood, but a critical one as well. He relishes in the creative side of the artists. He also despises the industries treatment of the artists and the cold business strategy. Fincher is good at reading people like a book and he sure knows a thing or two about studio meddling. Still, itâs a bittersweet to see his late father, Jack Fincher, who wrote the screenplay for this movie, get screen credit at the beginning, all these years after his death. And while Fincher may have harsh feelings towards Orson Welles, but there is no denying Fincher has respect for the man. So, I do not believe this is an anti-Welles movie.

Everything on a technical standpoint is an absolute marvel. I was completely blown away on my first watch when there is a screen transition; all the lights, natural or from lamps, will slowly dim out first, while the actors are the last ones. I also love the little cigarette burn in a couple of shots. Erik Messerschmidt's cinematography is absolutely stunning in black and white. He perfectly uses the light and shadows for each scene to make it look so rich and have depth to it. The editing and clean cuts really made the dialogue scenes have a certain flow to it. Not forgetting the top-notch audio work in the movie, which sounds very echoey and fits in the period of movie making.

Trent Reznor and Atticus Ross' score is terrific and effectively uses every authentic period instruments of that era, delivering a sharp and old-fashion score that evokes not only Old Hollywood, but âCitizen Kaneâ.

Gary Oldman is phenomenal as the title lead, Mankiewicz, a man who was more drunk than sober. A comical yet grounded portrayal to the uncredited alcoholic, as he looks so bloated and mentally absorbed that itâs a miracle he is always on schedule with work. Gary Oldman is so slick and charming in the role that I can understand why people put up with Mankâs unprofessional behaviour. People seem to be bothered with Oldmanâs casting, as apparently he is âtoo old to play the roleâ, since in the movie Mank himself states he is 43 years old, while Oldman is 62. Well, if you look at any photos of Mankiewicz, he looked so much older than his actual age. There was one photo of him when he was 44 but looked mid-60. All thanks to alcohol and smoking that aged him like sour milk, because back then nobody took care of themselves, as health and mental wellbeing was the last thing to think about, and Mank did no favours for himself. My grandma once had a friend who sadly died due to heavy drinking and smoking a couple of years ago. She abused the substance so much that she lost the sense of taste in her mouth, so every food tasted awful to her and she didnât eat at all, which made her weight drop down until she was flesh and bone. I remembered how she looked; saggy and loose skin, her black stained teeth hanging on for dear life on her gums, and bony features. She was 39 but looked 60! So yeah, this whole age thing is completely pointless and can be easily justified. And besides, Oldman is brilliant in the role.

Amanda Seyfried also delivers an excellent performance as Marion Davies, Aka âDulcineaâ, nick named after the fictional character in the two-part novel âDon Quixoteâ. Her golden hair, rosy cheeks, coral lips, her neck alabaster, her bosom marble. Ivory her hands and whiteness her snow. âDulcineaâ means sweetness in translation. Seyfried is the type of actor that has been around for quite a while now, and yet hasnât had a breakout role. In âMankâ, Seyfried finally gets her time to shine and it is glorious to watch.

The other cast members all did a fantastic job in the supporting roles. Arliss Howard is great as the tactful and emotional movie producer Louis B. Mayer. Charles Dance, man what a presence and he left such an impression on me despite the small screen time as William Randolph Hearst. He could stare and say no words and still convey what he is really thinking. Lily Collins, Tom Pelphrey, and Tuppence Middleton all did a great job and stood on their own next to Gary Oldman. While there are loads of characters, but I still found them all quite interesting and equally had compelling arcs.

Tom Burkeâs portrayal as Orson Welles is nothing short than amazing. His voice and mannerism are so on point its kind of terrifying. While itâs a shame his screen time is tiny, even so, I can see why that decision was made. We all know about Orson Welles, but little on Herman Mankiewicz. In this movie, we see a lot of Hermie, and see little of Welles.

The movie is not for everyone as I have seen my fair share of mixed reactions. I can totally understand why somebody may find the movie boring, or pointless, or hollow, or frustrating by how its structured. However, I am the complete opposite. I was never bored watching it and I wouldnât call my experience hollow if I laughed and was deeply moved by it. Polarizing to say the least, so if you are going to check it out, then I recommend going in and form your own opinion rather on what other people have said.

Overall rating: It blew my wig off!