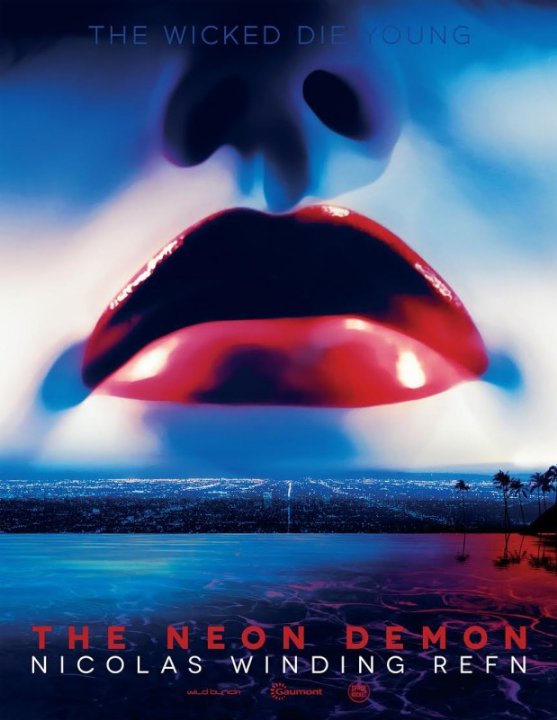 Sarah: "What does it feel like, to walk into a room, and it's like in the middle of winter. You're the sun."

The Neon Demon is a movie experience that I will never forget. From the minute it starts, I was glued to the screen and not once could I look away, even with the long silent moments, I was still hooked. The LA lights are something to drift away too.

Nicolas Winding Refn can be a love or hate thing with me. I loved "Drive" and "Bronson". I didn't like "Valhalla Rising" and "Only God Forgives" that much. He's got talent, I can see that and I know that he wants to make movies that only he wants to see, and not just for others. I think we all can agree that all of he's movies are shot so beautifully and if one of he's movies as the word "Neon" in the title, then you better you expect something glorious. Refn shines in The Neon Demon by adding this dream like fairy tale theme to the mix. There was so many times I had a "Suspiria" and a Michael Mann vibe to this (with the use of colors and the LA lights). This was such a step up from "Only God Forgives".

What "Only God Forgives" was trying to get across in it's symbolism was too simple that I pretty much got all of it. It got repetitive in terms of the visual imagery that the film constantly presents, but I feel that those scenes didn't have any glue to hold those previous scenes together. It was pretty much all icing but no cake. And while I got what Refn was doing with "Neon Demon" in terms of the fashion industry, but I still feel that there's more to it then that. Even through I don't 100% understand all of it, I still felt that I got more out of it than "OGF". Is it obvious of what it's getting across? With the fashion industry, yes, but with everything else, no. I think plenty of re-watches might help, as I do want to watch this again.

Elle Fanning was pretty fantastic as the beautiful but dangerous Jesse. But I thought Jena Malone steals the show, as she was brilliant. Her character dose the most unnerving things that you can't even imagine, but still manages to be attractive. Oh and I can't look at Keanu Reeves the same way again after this. He's good in this but...damn. Refen characters are not from this earth.

The opening sequence to this movie is just magnificent. It's everything that a movie should do to get you engaged. The staging was on point, the framing was flawless and Cliff Martinez amazing soundtrack blasting in your ears was just icing. It left a massive smile on my face.

Where do I even begin with the soundtrack in this movie. It's sexy, stylish with a bit of glitter and just pure magic. It's probably one of my favorite soundtracks of this year. Cliff Martinez is just a fantastic composer that always delivers that an excellent 80's vibe in he's music. Even topping his previous work which I didn't expect him to do.

There's some things in this that I did pick up on that I'm not sure if others have. The cannibalism in the movie is basically another way of looking at the industry of modeling, with models who actually do starve themselves to death just to get the perfect shape. Basically letting your body eat itself, which is cannibalism. I might be over thinking things, but I thought to throw it in there as a cool little thing to bring to the table.

Everyone in this film sounds so fake and shallow, and that's not even a complaint. Beauty from the outside but shallow and dead from the inside. It's all intentional.

It's not a perfect film. The story is flat and the dialogue is really bad in a few scenes. It can be quite stupid at times, but I'm glad it doesn't take itself too seriously.

This isn't for everyone, as I already have seen two sides to this. You either love it or hate it, and I can understand both reasons. Different strokes for different folks.

Overall rating: The Neon Demon is a disturbing and yet beautiful film that's very hard to recommend to people. While not my favorite of Refn, but it's pretty damn close, like third place. I honestly can see this having a cult following in the future. I really do.