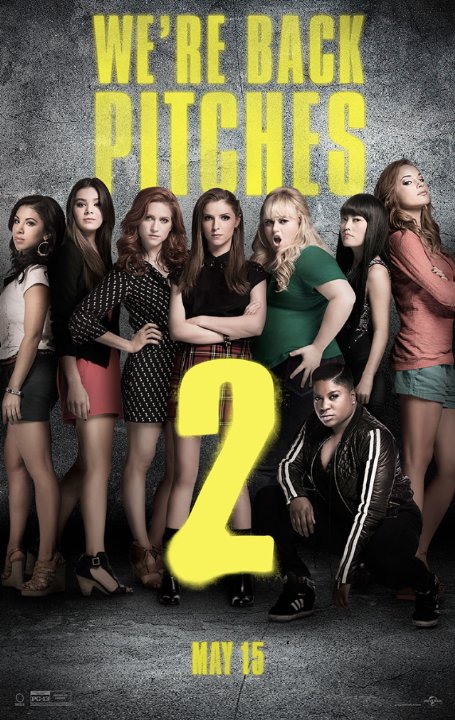 So this movie beat the action movie of decade Mad Max: Fury Road at the box office, this is why we can't have nice things.

The story is about a capella group, the Barden Bellas are boldly going where no American team has gone before: setting out to win a grueling international competition where all their talents will be put to the test.

Now I wasn't such a big fan of the first movie, it wasn't terrible or even good, it was pretty mediocre at best but I still found some parts in the movie to enjoy and maybe laugh at, but these a lot of people out there who liked the movie and that's fine with me because at least the first film was pretty harmless and had funny scenes in it, but Pitch Perfect 2 has to be the most cliche movie so far this year and I'm going to explain in a minute or two.

Elizabeth Banks as the director was a piss poor choice, because I thought she didn't bring anything new to the table when it comes to the sing off or even the character's. This is the same director who directed porn and...Movie 43. I don't hate Elizabeth Banks and I don't like to talk crap about her but if I have to be honest she wasn't all that good at directing because when you're a director you got the biggest job and you have to make it work and it doesn't happen here as the jokes fell flat and most of you may say it's the writing but let's not forget that she's looking the screenplay going "Yeah that's good let's start rolling". But Elizabeth Banks also stars in this movie and she was funny in the movie, so yeah that's it for Elizabeth Banks...I still don't forgive you for Movie 43.

The whole cast all do good in the movie because they are all great actress, but the one thing that I thought lacked in the first movie and this is some of the characters and I'm not saying that they horrible, it's just that some of them come off cliche and a bit stereotypes with the humor that did not help at all. You got that fat one who's self ware of herself and always makes jokes about her weight and doesn't know anything, you also got the weird Asian women who dose strange and odd things because well the script says so. I don't blame the actress for this as I think it's the directing and writings fault that this came out flat, but aside for that the whole cast did a fine job and did what they could with what they got.

Now I going to sound like a old nick picking grumpy man for saying this but I don't like modern music from today, yeah these some good modern music out there but the kind of music that I like is the ones that focus on it's lyrics and doesn't repeat the same line over and over again and doesn't feel lazy, well in this movie they do they Capella to modern songs and the songs that they pick are the songs that I personally don't like as I exampled before about how music should be done right by it's lyrics and the sense of passion and heart put into them.

The writing as I brought up early in the review wasn't very good. At least in the first movie it had funny elements with the character's and how the movie was self aware of how over the top it was, but in this movie it's more of jokes and less of the funny impact on the character's, the movie did a lot of South American stereotype jokes and I'm here thinking "Wow this who ever wrote this movie really hates South American, and every time it came out of they mouths I literally rolled my eyes with shame and pain.

Now I don't hate this movie but judging on this review and I how I brought up a lot of negative things about the movie, but I didn't walk out of the movie feeling a shamed of being human, no I just walked a bit disappointing because I thought the squeal was maybe going to be better just by the little hype I heard from the movie. If you like the movie that's fine, but for me I'm still not a fan.