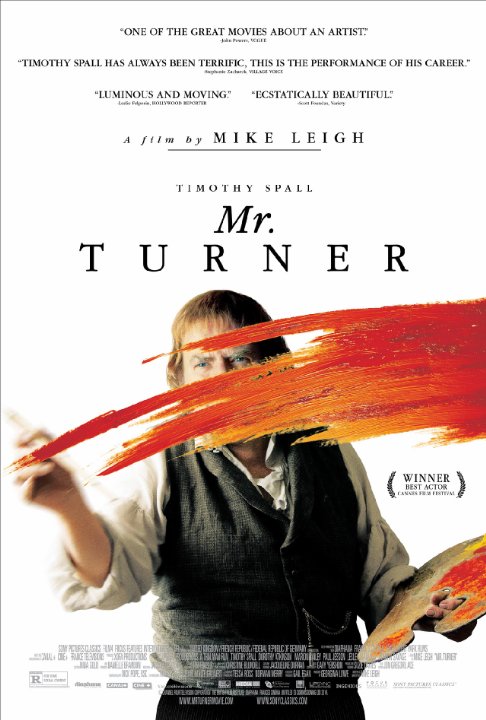 Timothy Spall crying in this movie is the funniest thing I've ever seen.

The story to Mr. Turner is about a British painter J.M.W. Turner (1775-1851). Profoundly affected by the death of his father, loved by a housekeeper he takes for granted and occasionally exploits sexually, he forms a close relationship with a seaside landlady with whom he eventually lives incognito in Chelsea, where he dies. Throughout this, he travels, paints, stays with the country aristocracy, visits brothels, is a popular if anarchic member of the Royal Academy of Arts, has himself strapped to the mast of a ship so that he can paint a snowstorm, and is both celebrated and reviled by the public and by royalty.

Let me just start off by saying that this movie isn't for everyone, I mean some people are going to love the clear and breathtaking style of the movie and the story, but some people may think that this movie is boring or just flat out dull, which I fine with that because every has a opinion. When I finished watched this movie I didn't know what to think of it, until I though it through over night and all my thoughts for the movie came together, and my overall thought is... it's a okay movie.

I have seen Timothy Spall in many roles in the best, but not like this one, because he doesn't just play a character, he played this role like if it was really him. I heard some Oscar buzz about his performance in this movie if he dose get nominated in this movie I will be very happy, but if he doesn't well the Oscars can go f**k itself.

The directing in this movie is just the best example for young film markers out there to make a beautiful peace of art that glues you in to it's movie, and that's Mike Leigh for you.

The Cinematography and the Art direction in this movie is so top notch and so beautiful to look at, that the movie takes a risk and allows the cinematography to stink it's teeth into the atmosphere and let the beautiful ways of life to over the screen and to me that's art.

The movie at times can be boring and pretty slow. If I was the editor for this movie I would have edited some parts out, where nothing really happens or character's doing and being really uninteresting things, and that's my other problem with the film it's character's. I never found them interesting at all they kind of dragged the movie down for me.

Mr. Turner isn't a movie that you put on to have a good time with your drunk friends on a Saturday night, no this is a movie for people who only look for story, acting and peaceful shots of the world, and this movie is like a love letter to those kind of people.