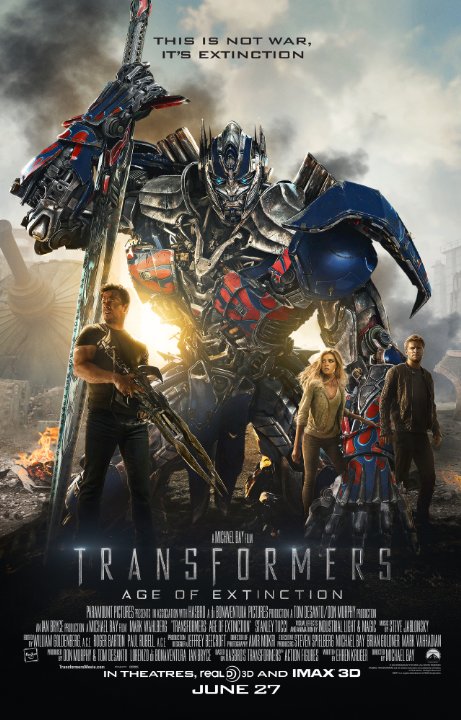 For the record: I have a lot of respect for Mr. Bay. Heâs an auteur in blockbuster Hollywood, a rarity in a time when most blockbusters only show style as a form of studio mandate. How different would Captain America have been if it had been directed by Alan Taylor instead of the Russoâs? It probably wouldâve been basically the same movie; but the Transformers movies are so much Bays children that itâs kind of difficult to imagine another director stepping in when the 5th installment comes out.

That said, Transformers: Age of Extinction is basically terrible in all the same ways that the third installment was. Itâs soulless, lengthy and vapid. The movie almost exclusively uses special effects and action to keep itâs momentum up, and is only really able to do so successfully for the first hour.

These movies are almost like deviously conceived torture devices. They start out kind of silly in a fun way, but they all end up overstaying their welcome by about an hour and a half. At the end of âExtinctionâ youâve been sitting and watching stuff you couldnât care less about for so long that the events on the screen have no effect on you other then psychological pain. Thereâs an alternate universe were Bay was able to keep all of his Transformers flicks down to an hour an a half; Causing the critics (and myself) to shrug in apathy instead of groan in pain. The movies many other sins might actually be somewhat forgivable, if only Bay could cut a few action sequences and a few secondary plot lines.

The almost three-hour run time displayed here would itself be forgivable if something of substance was placed on the screen, but that is not the case. This Transformers movie isnât really about anything, it doesnât tell us much about its characters, nobody learns anything except Optimus Prime, and heâs a giant robot so why the heck should we care about him? The movie gives us no reason to care. The world is at stake I guess, but itâs just a movie, it has to give us likable characters and situations to attach on to, but it doesnât.

To be fair, Bay has learned a lot from his other Transformer movies. The women are still objectified (the way they dress and make-up the 17 year old lead is particularly disturbing,) but itâs a little bit more subtle then it has been in previous entries. The humor hits a lot more, but thatâs mostly due to the brilliant casting of Stanley Tucci, who delivers some legitimately funny moments during the third act (Thought, to be fair, I was the only one in the theater that laughed during the entire movie.) The best change here is the casting of Mark Wahlberg for the lead; the man has more charisma then Shia LaBeouf in his little finger.

Yes the artificial stuff has improved a little bit in âExtinction,â but that was never the reason people really hated the Transformers franchise in the first place, itâs just an easy target. The real reason these movies are so derided is bad story telling, plain and simple. The story is treated as an afterthought to a humongous action sequence that wears out its welcome very quickly. If you liked the third Transformers movie youâll love the fourth, itâs basically the exact same movie. But if youâre like me and you canât stand this franchise, then this new entry will do nothing to change your opinion.

I agree it's difficult to shun preconceptions when you go see a movie, but I always try. If I hadn't at least tried I probably wouldn't have bothered seeing any of the Transformers movies; But you never know, a sequel to horrible movie can surpass the original. For example: I thought the original How to Train Your Dragon was kind of overrated, but I adored How to Train Your Dragon 2. You never know until you see it.

I try to keep an open mind when I go to the cinema, but Michael Bay does do his utmost to make it very difficult for me...!