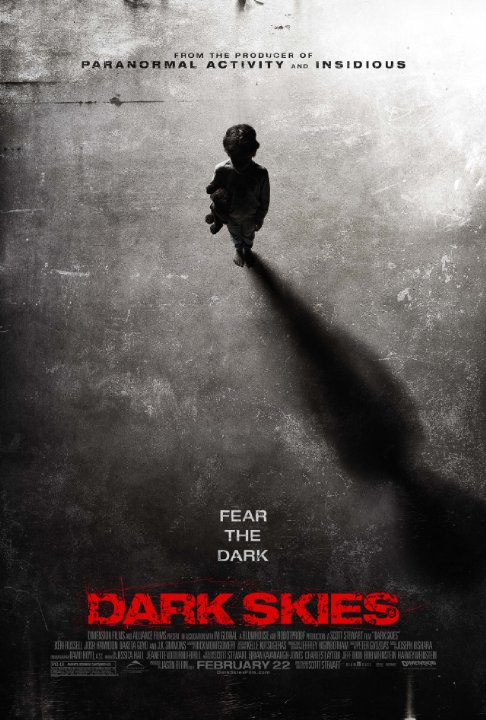 When i first saw the trailer for 'Dark Skies' Although looking somewhat creepy I figured it was the std sub horror of a family who moved into a house inhabited with ghosts that take control of them making them do things they would not normally do for example in the trailer Keri Russell (Tv's Felicity) who has an expressionless look on her face continually bangs her head on a window. Now after watching the movie I was totally surprised that ghosts weren't in fact the case here however they were visited and terrorized by something much more scarier and real in my opinion...aliens.

I like when I see a film expecting something and it turns out to be much more and totally different then what I was initially expecting. Although the cast aside from Keri Russell are not that well known, I only remember seeing Josh Hamilton in a bit part in one of the Bourne films (Not sure which one?) Like I have said in previous reviews having a no name cast usually makes for a better film at times and this is the case here.

Keri Russell portrays part time real estate agent /mom Lacy Barrett who alongside her husband Daniel (Josh Hamilton) and two children Jessy (Dakota Goyo) and Sammy (Kadan Rocket)
are having extreme financial difficulties as Daniel just cant seem to find work. They are a normal run of the mill family that is until they are chosen to be 'studied' by a group of aliens. Weird things start to arise within their home such as the security alarm being tripped periodically in the middle of the night,,, Lacy awakening and going downstairs to the kitchen to see that something has stacked their can goods and other kitchen items on top of one another. It's not long before Lacy turns to the almighty internet to seek out info on these strange occurrences. What she finds out is that they may have strange invaders watching their family. This info falls on deaf ears as Daniel thinks it's absurd that this is what could be happening.

It's not until the family agree to see Edwin Pollard (J.K. Simmons) (Ooops see I made an error, he is also not an unknown he played Jameson in Sam Raimi's Spider-man also was Schillinger in HBO's Oz)
Edwin gives them an questionnaire explaining that these questions given are to out the weirdoes that come to see him. although both of the parents now have skeptical looks on their faces they are soon staring at Edwin in horror as a lot of the questions about their general well being presently seem to be hitting home. They ask Edwin how he came into this info and find out he too has been 'investigated' by what he calls The Grey's (The Grey's are a band of aliens that apparently are the more popular alien sightings) This all leads into the family doing what they can to save their children from a possible alien abduction.

A good intriguing movie that I found, once again, to be a good surprise.