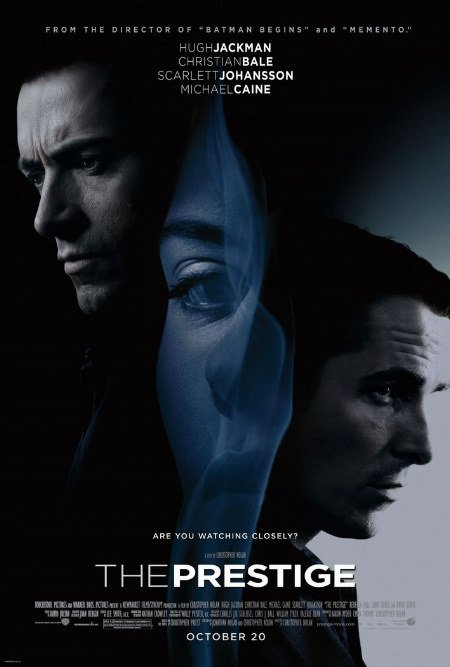 Before The Prestige started rolling, I was worried that I had placed my expectations for this film too high. I'll be frank: I shouldn't have worried. Never was I expecting this film to wow me as much as it did. I was engaged from the very first second, and remained so until the very last. I tried to force myself not to analyse the plot when the movie concluded, but it's impossible. It's like being stuck on a riddle all day, and indeed, The Prestige is very much like a riddle. And so it messes with your mind. Films like this can drive a person mad. The many, many plot twists are often surprising (sometimes even shocking), and I adored every one.

Two passionate magicians, Robert Angier and Alfred Borden, are having massive success with their brilliant illusions. But when one of their magic shows goes horribly wrong, the two turn against each other, plotting and out witting the other person. It becomes an obsession, and consequences occur.

The Prestige is simply thrilling. Fast paced, mesmerizing, and doesn't feel even a bit long- despite the over 2 hour run time- The Prestige has you hooked from the very first shot. The plot is so intricate, weaving together 3 different times in the two magician's lives. This is at first overwhelming, but the picture grows clearer and clearer, but it doesn't make things any less unpredictable.

The tone of the film is dark, and indeed, there isn't a true protagonist. There are main characters- in the form of the two magicians- but they both seem morally incorrect. In a way, this might suggest that one doesn't connect to either one in sympathies or emotion, and yet, one feels for both. Both seem in the wrong- and deciding which one is more at fault may simply come down to a "he started it" conclusion- but at the same time, they are both characters we sort of root for. We never really choose one fully over the other, as their is still an emotional anchor for each (but to keep spoilers out of this review, I won't discuss this element further).

The twists are devilish. And there are many of them. You find yourself surprised so very often in this film, as events continue to unfold. Not to make the obvious Inception joke or anything, but The Prestige has many layers.

Everything about this film is so smart, and so well done. The characters are flawlessly developed, and the story is original, unique, and gripping. I've already said plenty about the twists of course, and the intricacies with the interwoven stories. I'm shocked and appalled that this film did not receive so much as a nomination from the Academy for editing, as it is so skilled and precise. I'm not the kind that pays attention to the editing, but in a film like this, it's crucial- far more so than most action films.

The A-List cast is perfect in nearly all of their roles. Hugh Jackman wowed me as Robery Angier- something I was not expecting. His role requires so much depth and emotion, and Jackman totally sells it. Christian Bale as Alfred Borden is also excellent, his character's initial simplicity betrays his complexities. Other notable performances come from Michael Caine, David Bowie, and Andy Serkis.

The score, composed by David Julyan, is my only half-issue with the film. While the score does enhance the onscreen events, and perfectly sets the tone and often the emotion, it's also entirely underscore, and is unlikely to be very interesting when taken away from the film. It often feels quite synthetic, and is completely unmemorable, not boasting a single theme or idea that sticks in the memory. It works within the film, but is unlikely to do so outside of it.

The Prestige not only impressed me, it wowed me. It's an experience that cannot be missed. Masterfully deceptive, and deviously assembled, The Prestige is, dare I say it, a masterpiece. The Prestige succeeds as a mystery, a drama, a thriller, and a mind-bender, while placing heavy focus on the characters themselves. Just one bit of advice- a caution if you will: Don't over think it, just absorb it all. Pay attention, and you will be greatly rewarded.