JLFM's Movie Review of Despicable Me 2 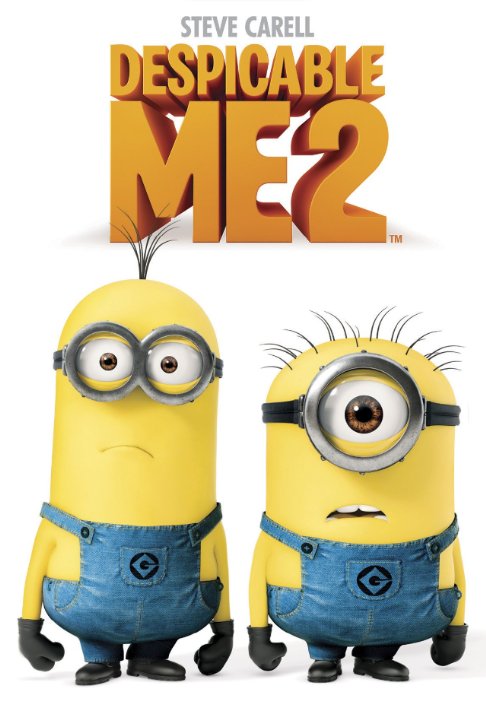 I can't say I didn't enjoy Despicable Me 2 because I did, in fact, have a good time watching it. The gags were funny enough, the visuals are nice enough, and the experience was pleasant overall. But at the same time, I couldn't help but feel a little let-down considering this is the much anticipated sequel to the surprisingly funny Despicable Me. It just seems a little weak, even rushed, but I can't deny it's entertainment value and easy appeal that- if nothing else- provides a relatively amusing, if unspectacular 98 minutes.

The paper-thin plot features Gru, adapting to the life of being a father, when out of the blue, he is approached by an agent of the AVL (Anti Villains League) named Lucy Wilde, who wants Gru's help in capturing the villain responsible for stealing a very dangerous chemical.

Despicable Me 2 is a welcome return to lovable characters, but it seems that many of them really don't know what to do. Dr. Nefario leaves Gru in order to go back to evil, but this serves no real purpose in the story, nor does it carry any emotional weight. It seems that since he has nothing to do in this story, the filmmakers might as well just get rid of him. Margo develops a relationship with a boy that goes absolutely no where, and the other two girls basically just stand around and look cute for the entirety of the film.

This isn't as big a problem as it might have been, however, because no matter what these characters are doing, it's funny. That's certainly no excuse for sloppy screen-writing, but it eases the pain a bit.

On the other hand, characters like Fred and Gru's mother from the first film only appear for a few seconds at the end in non-speaking roles. Not only do they serve no purpose in this film, but they also remind us of how funny they were in the original, which makes their lack of presence in this film noticeable and disappointing.

On the subject of characters, we have a couple new ones. Lucy Wilde, portrayed by Kristen Wiig, is essentially the same character Wiig plays in The Looney Tunes Show (though this isn't much of a problem as the character is reasonably funny). Eduardo Perez is worth a few laughs (especially during his dance number, a memorable highlight of the film), and Ken Jeong has a small but amusing bit as a hair stylist.

The script, while a bit uneven, is funny- sometimes very funny- but ultimately can't match that of the original. The gags come frequently enough, and there are many laughs to be had, but one can't help but shake the feeling that there should be more laughs. One of the funniest things about the original was it's villain-related satire humor, and sadly, that's almost entirely gone in this sequel.

The voice cast is adequate. Steve Carrel is just as funny and lovable as Gru as he was in the first film. Kristen Wiig is amusing as Lucy Wilde, and Benjamin Bratt (replacing Al Pacino who dropped out less than two months before the film's release date) is solid as Eduardo Perez.

The animation in the original film was simplistic, but worked for the film. And while the animation has significantly improved in the sequel, it's still not as consistently stunning as that of Pixar, Disney or even Dreamworks. Still, it looks nice enough, and the bold colors are appealing.

While Despicable Me 2 is, in many respects, a disappointment, it's also a reasonably fun film with plenty of laughs to go around. It doesn't match the original (or even come especially close), but it's easy enough to like, and those minions alone are worth the price of admission.