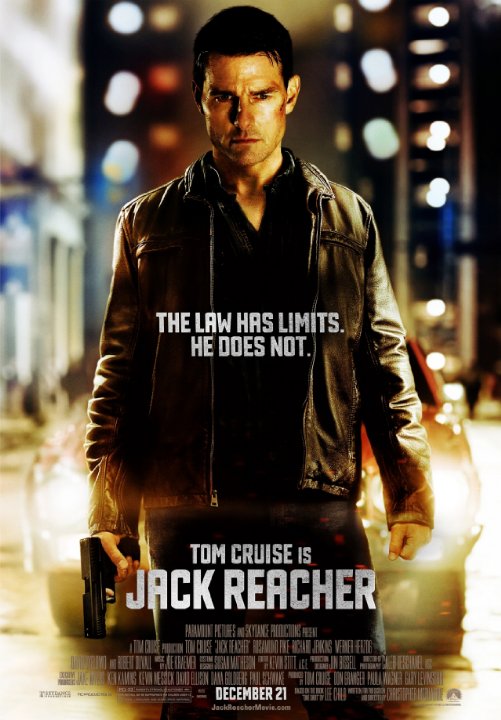 A man named James Barr is accused of shooting five random citizens. Jack Reacher, a relatively unknown status confronts Barr's attorney, Helen Rodin (the last name sounds remarkably like "rodent" in the film), and convinces her to examine the evidence before attempting to defend Barr. In the meantime, Reacher is in charge of...I don't really know...investigating? The problem is, the plot is decidedly muddled. They serve little purpose other than to loosely string action scenes and weak one liners together to assemble a "film."

It is impossible for me to discuss every little flaw in this film, so I will only cover the most important bits.

For one, the film is plagued with predictability. Countless cliches and a familiar story means few (if any) surprising events occur. There is a twist or two in the film (after all, this is a mystery film, if a poorly conceived one), but I saw them coming long before they actually occurred.

The back-stories behind the shooter victims represent some of the most emotionally manipulative content I've ever seen in a film. I was actually insulted that the audience was supposed to be moved by these stories as they are hopelessly cliched and melodramatic.

I can't remember the last time I saw a film where I was so uninterested in the events on screen, and so unattached to the characters. The story is boring, the characters have no personality. Was any actual effort put into any part of this film? Even the actual scenes are often nonsensical and cheap looking. They lack suspense, and many of them don't seem to fit into the movie very well (the latter point is most noticeable in one of the most boring and poorly made car chases I've ever seen).

Jack Reacher also suffers from being way too much like a kid's film. Seriously. Numerous kicks in the crotch, bumbling henchmen, and quite a bit of slapstick eat away at the screen time. And speaking of screen time, I should mention that this film is over 2 hours long, and every minute seems like an eternity.

Part of the boredom is a result of terrible dialogue. It is drop dead boring, and there's a lot of it. And when the dialogue isn't boring, it's laughably terrible. Did someone really get PAID to write this script?

And then the acting, which is extremely weak. Tom Cruise delivers no energy to his performance as Jack Reacher, and Rosamund Pike as Helen Rodin does an excellent job at portraying a plank of wood. Seriously, I don't think she changed her facial expression a single time in this film. The rest of the cast is just as bad, and the performances are never among sub-par.

The score, composed by Joe Kraemer, can't even be defined as music. I don't recall a single moment in the film where the score had an actual melody. The score is also pretty sparse, as a lot of scenes don't have any music (though some scenes desperately needed some). It doesn't help that the little music that's there often sounds like Howard Shore's much better score for Hugo.

I have hardly scratched the surface of everything I hated about this film. Truly insulting in every respect, this is an unwatchably bad film. I almost want to say that it's essentially a made-for-TV thriller, except that's an insult to made-for-TV films and thrillers. Aside from one amusing line about the antics of cops (which provided one meager chuckle), Jack Reacher is a complete waste of time and a shocking mess.