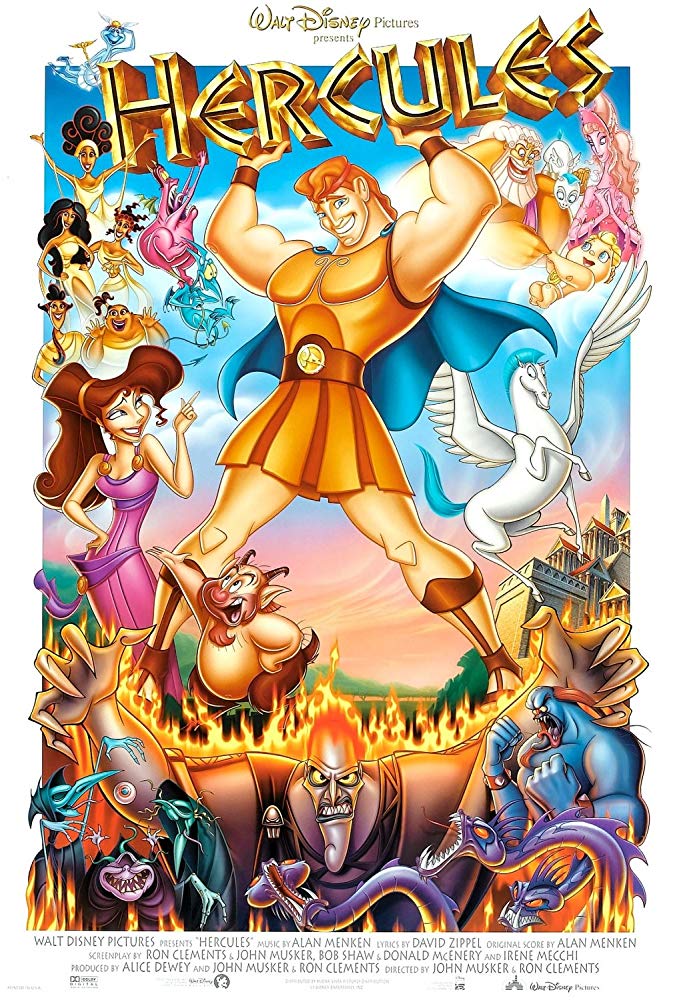 A Disney musical revolving around Greek mythology seems like a great idea. And in Disney's Hercules, the house of mouse makes great use of the famous characters and setting of Greek mythology. There's some hip, gospel songs and plenty of successful humor. So much works in this movie, but it's all sadly counter-balanced by everything that doesn't work.

Hercules is born to the god and goddess, Zeus and Hera respectively. And while there is joy at his arrival, Hades wishes to do away with the baby, as his fortune reveals Hercules as a potential threat. Hades sends his two dim-witted minions, Pain and Panic to turn Hercules mortal, and then kill him. Unfortunately for Hades, Pain and Panic slip up when Hercules transformation from god to mortal gets stopped part way through, causing Hercules to retain his supernatural strength, but remain mortal. Hercules longs to be reunited with his parents and the other gods, though he cannot until he becomes a hero, which will then allow him to be turned back into a god.

The set up for this story is extremely rushed, and feels almost tacked on. It's like Disney didn't want to spend much time developing the opening, and were more interested in cutting to the action. As a result, there isn't much at the beginning that's of interest, with the exception of one excellent gospel-style song, but I'll get to that later.

The characters are mostly uninteresting. Hercules and the romantic interest, Megara (known as Meg) are almost completely personality-less, while Philoctetes (known as Phil), Hercules' trainer, is just a big grump. Only the villain, Hades, is at all interesting, even if he's basically just a hipper version of Jafar or Scar.

Focusing less on story, Hercules relies on humor to get by. And while most of the humor is successful and funny, there aren't many big laughs here. Disney's next attempt at a hip comedy (The Emperor's New Groove) is a much more successful and enjoyable film.

There's some curious character oversights, and some muddled messages here and there. There are dull stretches, and the action at the end is a bit excessive. Flaws are not hard to find.

The songs are of ranging success. The majority of the songs are jazzy gospel tunes, complete with a group of African-American women singing the lyrics. Not only are these songs an innovative and refreshing concept, but the songs are fun and energetic too. It's hard to suppress a smile during these delightful numbers.

And yet, there are two songs that don't fit into the gospel theme. They are entitled "Go the Distance" and "Our Last Hope." Both are relatively terrible and instantly forgettable. "Go the Distance" exists only to explain Hercules' desire to go home. This is the kind of song that could've been written in 5 minutes over lunch. "Our Last Hope" has a terrible rhythm and bland lyrics and is ultimately, a mess.

It surprises me that a song was not provided for the villain, Hades. Just about every Disney films has had a song for the villain, so why did Hades have to miss out? His slick and sly personality would've been perfect for a nice jazzy beat.

The voice cast is a mixed bag. Tate Donovan provides a bland voice for Hercules, and Danny DeVito does the same for Phil. Susan Egan's voice for Meg is much more unique. It's a shame there wasn't an interesting character to go with it. James Wood is wonderful as Hades, providing a perfectly sly and confident voice for the villain.

The animation is detailed enough, but the animation style is a bit of a problem. The flat, geometric look just makes the animation appear cheap and lazy. CGI is occasionally integrated into the animation, and it looks great.

Alan Menken's score is superb, if a little shy of his work in other Disney films of the time. Grand melodies and exciting action music make this score a success, even though it sounds a bit familiar to Menken's score for Aladdin.

Sometimes funny, but riddled with flaws, Hercules is a disappointing Disney feature. As much as I wanted to like Hercules, there's just so much that doesn't work here. I felt uninterested in the characters and the story, and for most of the film, I was just waiting for the next toe-tapping gospel tune. The 90's was a great time for Disney, but Hercules may not be the best example of such success.