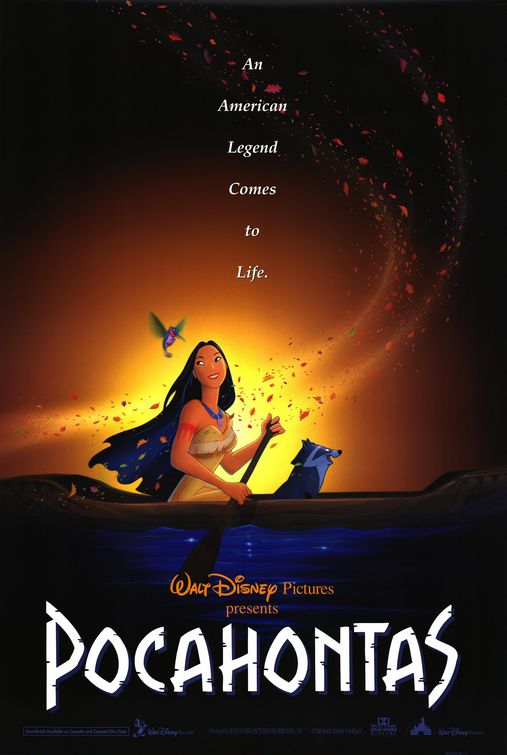 Underwhelming. That was my first thought after finishing Pocahontas. Granted, my expectations may have been a bit high, but this IS renaissance Disney after all. Frankly, Pocahontas is not one of Disney's greats, or even one of their goods. It's a mediocre film with some marvelous musical numbers placed between uninteresting filler.

Loosely based off of the real story of Pocahontas, this romance is formula, formula, formula. Pocahontas is forced to marry an unwanted suitor. She falls in love with a forbidden man. In this case, that man is John Smith. John Smith, being European, and known for killing savages, is of course, initially opposed by the tribe Pocahontas comes from. But John Smith comes to understand the Indians as intelligent and resourceful people, though the villainous Governor Radcliffe is less easily convinced.

Even at a lean run time of 84 minutes (I viewed the 10th anniversary version which includes one additional song, and some extra animation), Pocahontas feels far too long. Simply put, Pocahontas is a bit of a bore. Most of the time, I was just waiting for the next song to start, as they represented the only interesting parts of the film. Attempts at humor are few. Successful humor is even more rare.

This wouldn't be such a problem if the story was more interesting, or the characters more unique. And yet, we have cliched stereotypes, or even worse; completely personality-less individuals that seem to have little purpose in the film. Pocahontas is free-spirited and adventurous; in other words, she is completely indistinguishable with almost any of Disney's other princesses. John Smith has no personality, period. And Governor Radcliffe is the traditional evil villain, who has a distinctly and curiously lazy-feeling motive for his villainy.

The musical numbers are superb, though. While not as catchy or as magical as the best Disney songs of this era, Pocahontas still boasts it's share of enjoyable songs. "The Virginia March" is a delightfully retro Disney song. It would've felt right at home in some of Disney's oldest films. "Just Around the Riverbend" is a lively and joyous number, while "Mine, Mine, Mine" has a wonderfully grand finish, and fun lyrics. "Colors of the Wind" is possibly the best song in the film, with great music, beautiful lyrics, and the best visuals in the film. The only song in the film I didn't enjoy was "If I Never Knew You." This number was specifically added for the 10th anniversary edition, and it's formulaic, dull, and instantly forgettable.

The cast is weak. Irene Bedard and Mel Gibson provide generic and colorless voices for Pocahontas and John Smith respectively. Russel Means and James Fall were noticeably poor as key characters in Pocahontas' tribe. Only David Odgen Stiers (portraying Governor Radcliffe, and his servant Wiggins) shows any kind of energy in his performance.

The animation is breath taking, not that I would expect anything less from Disney. There's one scene at the end where Pocahontas is racing to her village to stop a potential war that's simply stunning. If nothing else, Disney has not slouched in their animation department when making Pocahontas.

The score by Alan Menken is predictably great. Applying the excellent themes from the various songs into the score, Menken has composed another success. It's beautifully written, and often outshines the events onscreen.

Not funny, not interesting, and terribly dull, Pocahontas is one of Disney's weaker films. While the songs are great, and the animation is gorgeous, Pocahontas can't capture the magic of other Disney films of the Disney Renaissance Era. The wonderful songs may stick in my memory, but the scenes inbetween are already being forgotten.