MovieAddict's Movie Review of Sherlock Holmes: A Game of Shadows 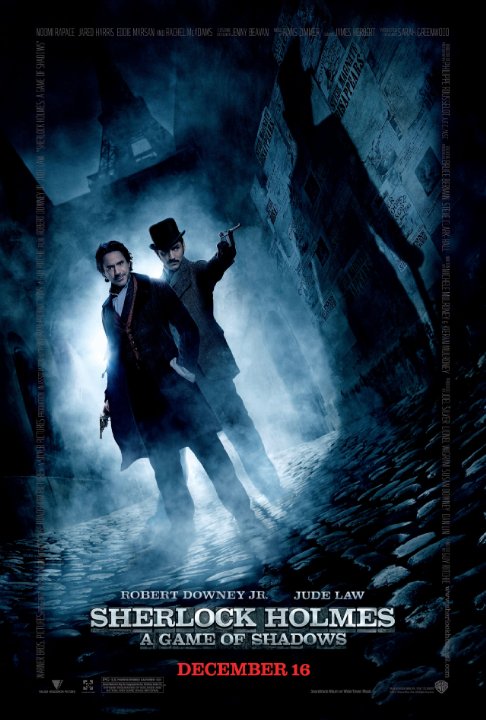 The plot takes part months after the first movie, where Dr. John Watson (Jude Law) is about to marry his fiancÃ©e Mary. Inspector Sherlock Holmes (Robert Downey Jr.) is to be his best man and throw his best friend and partner in solving crimes a stag party. Of course being Sherlock Holmes, he has other obsessions on his mind such as his arch nemesis the brilliant Dr Moriarty (played with fantastic intelligence and sinister intent by Jared Harris) whom Holmes believes is responsible for creating a chaos in Europe, and who, he later learns, wants to unleash a world war from which only he can benefit. I have to say that there is very little detecting in this one. Rather the film relies on breathtaking action and the unconventional friendship and banter between its two male leads. The bond between Holmes and Watson remains as strong as ever.

Itâs an absolute cracker of a movie with many twists and turns. The movie hurtles along at bullet train speed so you really need to hold on and enjoy the ride. We also get to meet the lovely fortune teller Madame Simza Heron, (played by a lovely and very bohemian Noomi Rapace, the Swedish superstar known for the Original Swedish version of "The Girl with the Dragon Tattoo"). Several action scenes are filmed in slow motion, making it more thrilling. Sir Arthur Conan Doyle gave attention to the fact that Holmes can 'see everything around him' and I thought Guy Ritchie and the visual effects crew accomplished this by using multiple camera angles and slowing down the footage to show everything that is happening.

Some of my favorite quotes from the movie:

âItâs so overt, itâs covert!â

âPerhaps it is best for one to die alone than to live life in eternal purgatory!â