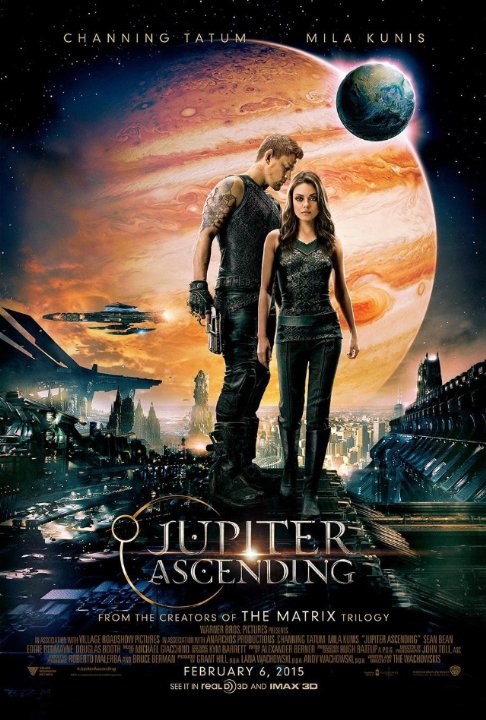 An ordinary young woman is rescued from alien killers and finds that she is not a cleaner after all, but a genetic descendant of an ancient intergalactic dynasty who stands to literally inherit the Earth.

This space opera from the Wachowskis has a very old school feel to it; it has the "Come with me if you want to live!" character dynamic and a plot that owes a lot to the likes of Flash Gordon and Buck Rogers. The Saturday morning serial feel is added to by a very episodic plot as our heroine is constantly kidnapped, rescued and kidnapped again by the various factions out to exploit her. The effects are pleasing enough and have a Dune-like quality in their representation of an intergalactic empire although the action sequences are so frenetically paced it often becomes difficult to tell what is actually happening. Mila Kunis is likeable enough but she always feels more like a refugee from a rom-com than an action heroine and Channing Tatum doesn't really have the edginess or charisma to pull off the "damaged lone wolf" he is required to play. The film is also not well served by Eddie Redmayne's villain as he is, frankly, awful. In fact the whole plot seems designed to appeal to pubescent girls - ordinary girl who finds out that she is actually a princess, swept off her feet by a handsome rebel - and the addition of a supporting cast of CGI manimals and a high-flying virtual skateboard and Jupiter Ascending feels more like kid's TV than sci-fi epic.

As a whole it is pacey enough to keep it marginally entertaining, but I personally find the fact that those responsible for one of the most innovative and influential sci-fi films of all time also created this juvenile space pantomime a little bizarre.