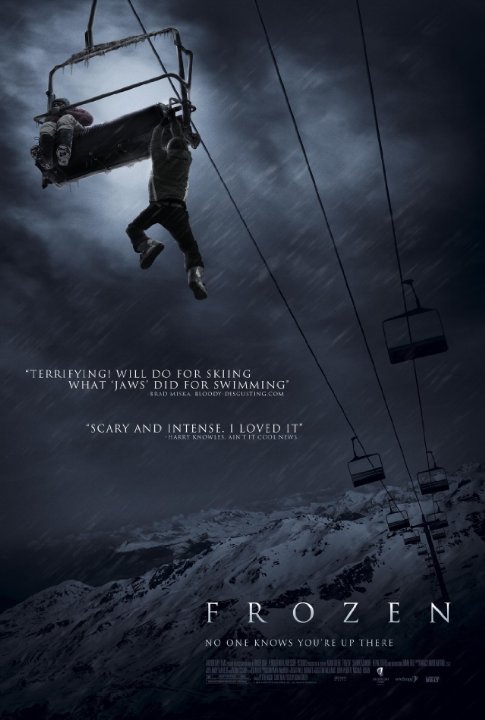 Finally I think I have finally reached the momentum I was hoping to reach with my horror screenings this year. Though some of the flicks I've watched haven't been bad, they haven't been anything to really go spreading 'good word' about. I can say the same about the most recent addition to this event.

I had seen a trailer for this a while ago and it made me think two things; 1.) yeah that would really suck and 2.) I'm glad I don't ski. After watching this movie I can promise you I do not intend on ever taking up skiing. If you want me to go on a ski trip, I'll go but I'm just going to stay in the lodge, next to a fire with some cocoa and a good book.

Basic breakdown for this movie: Three college students go skiing one weekend and end up getting trapped on the ski lift as the resort is closing for the week. That's right, I said week. Not weekend. 5 days. Cold weather. Really cold weather. And wilderness.

Reconsidering your winter activities yet?

I have nothing negative to say about this movie. The director (Adam Green, who wrote this too) does his job very well and has been the mind and matter behind some other horror/thrillers like Hatchet and Hatchet II. And though Green wrote a great script and directed it well, a lot of credit must be given to the actors; Shawn Ashmore, Kevin Zegers and Emma Bell. It is not easy to carry a movie between three people and the majority of the movie taking place on a stationary ski lift. (I would also like to point out some geeky irony that here Shawn Ashmore is in a movie called Frozen and he's played Iceman in the 3 X-Men movies).

There are a lot of uncomfortable moments in this movie that make you physically get squeamish. It reminded me a lot of how I felt when first watching 'The Ruins' also starring Shawn Ashmore.

What makes this movie all that much better. Well, in some special features on the DVD I learned that the movie was shot practical. What does that mean? It means they put the actors on a ski lift, in the cold, outdoors to shoot this thing. No sound stage. No green screen. No CGI. This baby was made as real as possible. Mad kudos there.

There isn't much else to say without giving away major story points in the movie. I plainly recommend watching it.

There really isn't anything I think they could have done to make this a better told story.