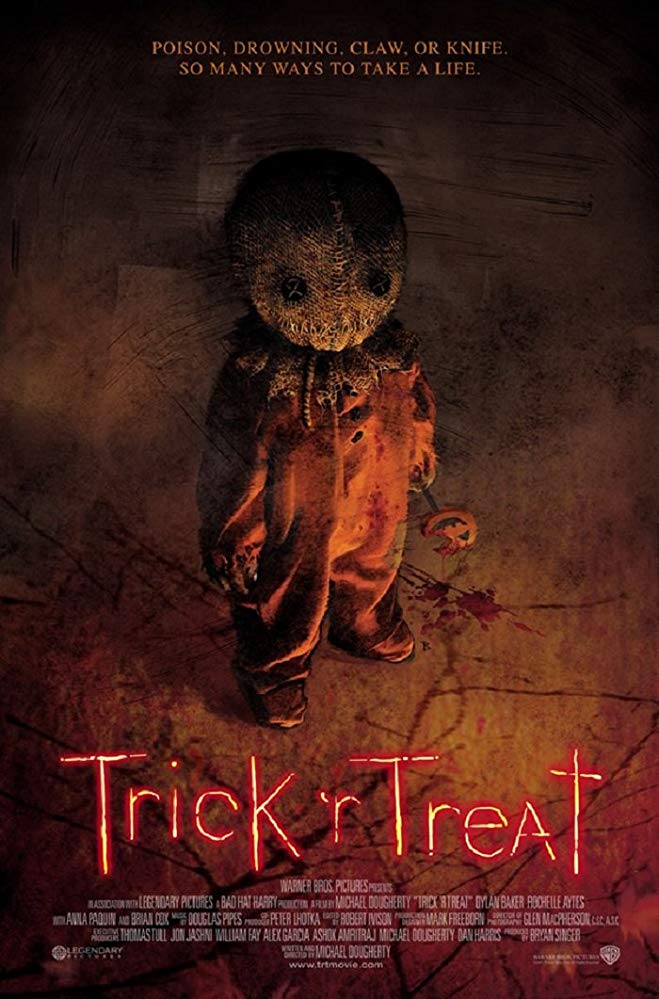 This is a movie technically 2 years in the making. Originally slated to be released in October of 2007; this flick has been sitting in production purgatory to only be released directly to DVD just a couple weeks ago. And for this say "What a shame." Finally, a decent Halloween-esk movie comes out that is original, very entertaining and what I may consider one of my favorite movies of the year...and it doesn't even get the respect of a theatrical release.

I watched this movie Friday night (before going to see 'Paranormal Activity'; so you can consider Friday was a very GOOD movie night for Sancho), and I was not only impressed....but disappointed I did not follow my gut and just buy this movie before seeing it. Instead I was responsible and rented it. Now that I've seen it, I want to watch it again before the end of the month....so I go out to try and buy it...and it's sold out everywhere. The same thing happened to me when 'The Monster Squad' was finally released on DVD a few years ago; and now I can find that movie everywhere....so I figure it will be only time before stores get their stock back in.

Anyhow, 'Trick 'r Treat' was produced by Brian Singer, and written by Michael Dougherty (writer of X-Men 2, Superman Returns)...and speculation around the web is that this movie was shelved for so long because of the travesty that was 'Superman Returns'....however I say this is a completely different genre and again I feel the studios lost out on a tremendous amount of box office receipts.

'Trick 'r Treat' is very much in the same light as 'Tales from the Dark Side' and other horror type movies that have interlinking stories.

This movie takes 4 stories and they all connect one way or another. It has a stellar cast like Dylan Baker, Anna Paquin, and Brian Cox who are great to see in this type of flick (though Dylan Baker is a brilliant character actor....one of which I'd love to see actually become The Lizard in a future Spiderman movie).

Our 4 stories consist of a school principal (Dylan Baker) who enjoys Halloween just a little too much. A "virginal" girl (Anna Paquin) out partying on Halloween night with a group of her friends looking for that one "special" guy. 4 kids who visit the site of a tragic Halloween day accidents year before...only to have a joke turn against them. And a old, bitter-ish man (Brian Cox) who gets tormented by a costumed "kid". Do you feel like I over-used quotes? You won't once you've seen the movie.

All 4 stories link together very well...but subtly. When the movie ended, I found myself wanting more. Not only more scenes in each individual story...but also this is a the type of movie I would want to become a franchise. Stop making all of these damned 'Saw' movies and invest the entertainment money in a franchise that doesn't focus purely on this torture stuff.

Early theme ideas for the original 'Halloween' franchise were to have each movie be different but themed around thew Halloween holiday. Michael Myers was only supposed to be a 1 movie deal. Then with the sequel they decided to keep him around...and it did okay...sometime over the top...but okay. And Halloween III they decided to branch somewhere else. I respect that. It was very....strange...but creepy in it's own right. However, it was not received well and thus begins the reign of Michael Myers.

'Trick 'r Treat' could be this franchise. I would love to see a yearly installment of this with 3 to 4 new interlinked stories all about this holiday. Maybe even occasionally branch things together from earlier movie stories too. If written right, this could become an incredibly well done series.

Story and actors and performances aside, the production value is incredible. The DoP is Glen MacPherson, who I will honestly say has been the DoP on many movies I've enjoyed...with the exception that he as the DoP for the pilot of 'Sliders'....(awesome show!). But I don't think this movie could have looked better. The lighting was perfect, the colors were perfect, the saturation was perfect....the costumes, the set design....and on and on and on.

I would have to give this movie 4 out of 4. One of my personal favorites and will most likely become a staple for me to watch not only every year, near or on Halloween, but pretty much any time when it's late, or storming, or just generally the day/evening has that eerie type of feeling.