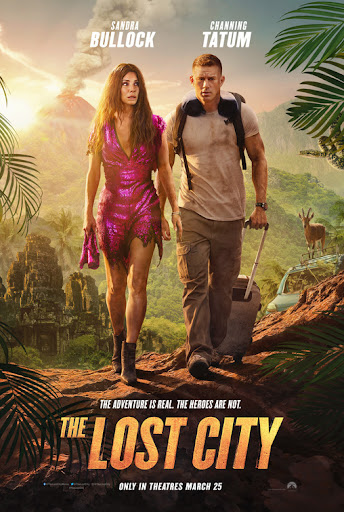 Plot: Loretta Sage is a highly-successful, and highly-reclusive romance novelist who finds herself on a book tour along with her cover model. But things take a slight detour when the duo become involved in a kidnapping plot and embark on a true, and dangerous, jungle adventure. -- Chris Kavan

While pretty much harmless. "The Lost City" gives no valid reasons to revisit it but plenty as to why you should just rewatch "Romancing the Stone" instead.

Sandra Bullock and Channing Tatum carry this derivative but charming riff on popular adventure movies like Indiana Jones or Romancing the Stone. In fact it is rather similar to Romancing the Stone. Daniel Radcliffe chews the scenery like mad as the villain, an eccentric billionaire turned graverobber. It is not particularly well written but the cast really milk the jokes for what they're worth and there are some decent action scenes. Both Sandra Bullock and Channing Tatum have surprisingly good chemistry. Brad Pitt has a cameo appearance that is hilarious.

Lost City Worth Getting Found

The Lost City is not a remake but it obviously takes a fair bit of inspiration and direction from the classic 1980s action/comedy/romance Romancing the Stone. And that is perfectly fine in my book and the reason this film works, much like that one, is due in large part to the great chemistry between leads Sandra Bullock and Channing Tatum - along with some scene-chewing fun from the film's villain played by Daniel Radcliffe.

Bullock is romance author and former archeologist Loretta Sage. Sage has been writing since the death of her husband and still finds it hard to move on - or even interact with most of the world. In order to boost her brand, her loyal and hard-working publisher Beth Hatten (Da'Vine Joy Randolph) has booked a publicity tour along with her popular cover model Alan …

No posts have been made on this movie yet. Be the first to start talking about The Lost City!