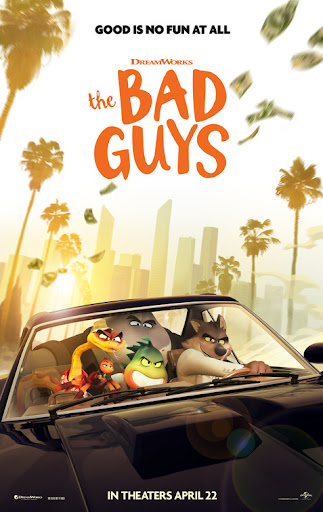 Plot: The Big Bad Wolf leads a crew of bad guys - Snake, Tarantula, Shark and Piranha, each with their own skills necessarily to pull off their daring heists. But after trying to take the ultimate prize and getting caught, nice guy of the year, guinea pig Professor Marmalade promises to reform the crew into good guys with some surprising revelations along the way. -- Chris Kavan

Thanks to its eye-catching animation and spunky spirit, "The Bad Guys" gets decent mileage from its overdriven heist comedy vehicle.

The Fast and the Furriest

A mix of slick, modern animation with some elements of classic heist capers, The Bad Guys is fun treat that the younger set will enjoy, but adults will happily sit through as well.

The main draw for this is not just the excellent animation but a killer cast led by Sam Rockwell as the slickly smooth Wolf joined by Marc Maron as the grumpy, older Snake, Craig Robinson as the master-of-disguise Shark, Awkwafina as the tech-savvy Tarantula and Anthony Ramos as the unhinged (and gassy) Piranha. Zazie Beetz is also along as the capable Mayor Foxington with Richard Ayoade voicing the nicest of nice guys guinea pig Professor Marmalade. The voice talent goes a long way into making this a fun film with each delivering a memorable performance.

The film clearly draws inspiration and alludes to …

No posts have been made on this movie yet. Be the first to start talking about The Bad Guys!