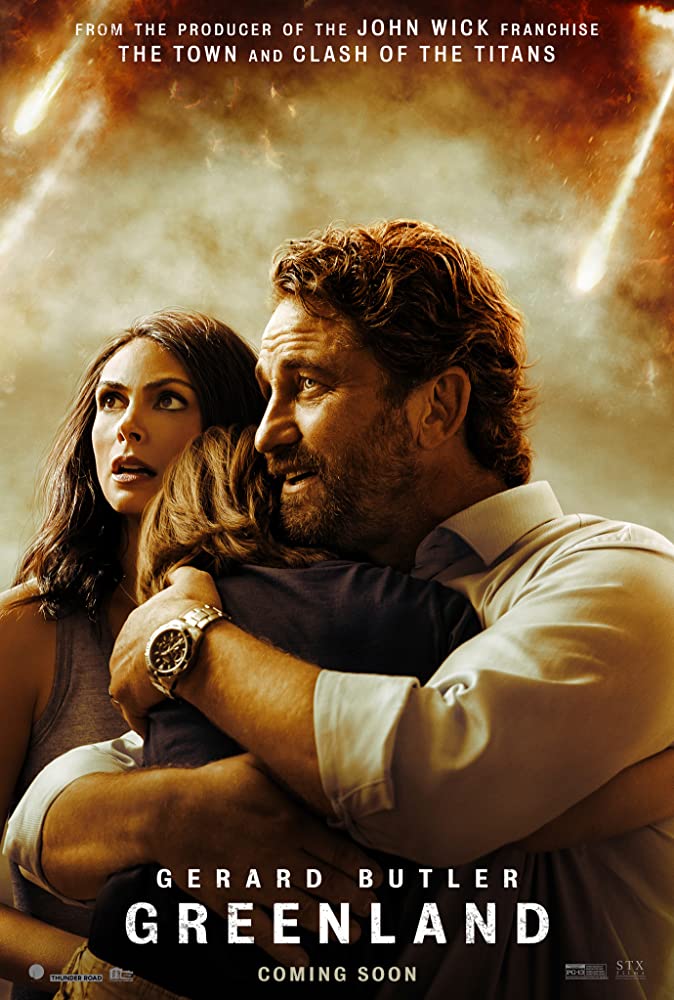 Plot: With a planet-killing comet heading towards Earth, a father, his estranged wife and son make a dangerous trek towards the last safe haven, even as humanity faces destruction and desperation. -- Chris Kavan

Greenland could had been just a simple popcorn flick. Instead it winds up being something more thoughtful, suspenseful, and at several times, frightening.
Gerard Butler plays a family man who races to get his family to sanctuary before a comet strikes the Earth, killing off 75% of all life on the planet. This immediately sounds like another schlocky SyFy Channel movie. But the mood is far darker and the gravity of the situation is never played for laughs. It feels like an older more serious minded disaster movie from the golden age of science fiction cinema.
The cynical argument would be that the movie resonates better because it was released during the pandemic. No, I can safely say that this is one of the best disaster films in years. Itâs certainly Gerard Butlerâs best movie …

Probably not the disaster movie you were hoping 4

Just please give us a call if you find out anything when you get there.
Like where we can go to be safe.

Nothing like a decent disaster movie every now and then. A film that can satisfy the disaster tourist in you. The number of such films that have already been made is countless. The causes of global destruction are varied. There were devastating earthquakes (âEarthquakeâ and only recently âSan Andreasâ) that lifted up plateaus and ripped apart entire metropolises. Boats that sank because of a huge wave (âThe Poseidon Adventureâ) or a stray lump of ice (âTitanicâ). Erupting volcanoes (âDanteâs Peakâ), oncoming ice ages (âThe Day after Tomorrowâ), tsunamis (âLo Imposibleâ), or (and more appropriately at the moment) a rapidly spreading, deadly virus …

No posts have been made on this movie yet. Be the first to start talking about Greenland!