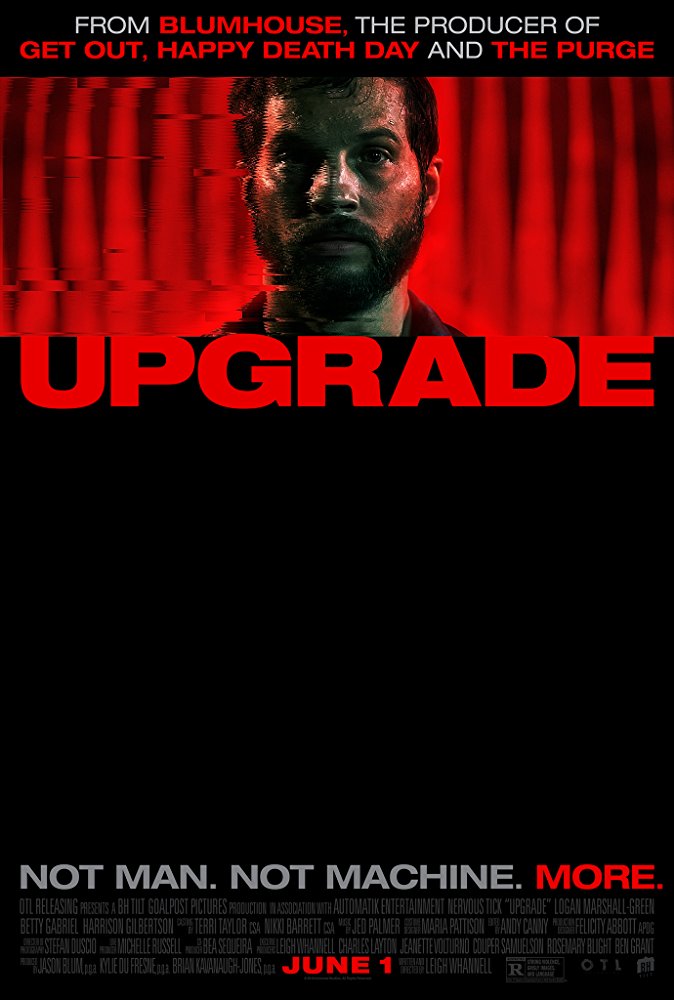 Plot: In the near-future, technology is ingrained in all aspects of life. Grey Trace is a rare technophobe, but following a life-altering event, he will sacrifice his own humanity to gain his revenge as he is implanted with an AI chip called STEM. -- Chris Kavan

It's like Venom, but upgraded. This is Leigh Whannell second movie he directed and it's pretty solid. Cheesy and poorly written, but enjoyable with some cool practical deaths. Logan Marshall-Green, in-spite of his uncanny replica to Tom Hardy, was pretty good, especially with his reaction to tense situations made it even more entertaining.

Although I found its outcome foreseeable and the ending not entirely satisfying, "Upgrade" is a shocking and funny thrill-ride not unlike those from the "Terminator" era.

Didn't even hear of this until minutes before I saw it, and was probably the best surprise all year! In the top percentile of AI/"robot" movies, with some of the standard eye-rolls of Sci-Fi Action but high quality writing and suspense... a few parts may be predictable to the astute but it never felt dumbed down, nor convoluted... gripping and perfect twists. Modern Matrix-like action and feels like a whole franchise/universe could be based off this character (or characters). More precisely I'd say 3.8/4

Never thought it would be so freaking awesome.

Youâre the one doing it all.
Youâre not a robot.

In my film review of the movie âThe Hollow Childâ, I started again with a plea about trailers and I summed up the reasons why I avoid them. I saw the trailer from âUpgradeâ by chance at the beginning of this year. Believe me, I was ecstatic and enthusiastic. âI HAVE to see this movieâ, I thought. There are trailers that look inviting and afterward, the film looks very disappointing. But âUpgradeâ certainly doesnât belong in this category. On the contrary. This is one of the best films of the year for me. An excellent SF provided with a wonderful concept and which gradually switches to a tough revenge film. For me, it was an exciting mix of âRobocopâ, âJohn Wickâ and âDemon Seedâ. âRobocopâ because …

No posts have been made on this movie yet. Be the first to start talking about Upgrade!