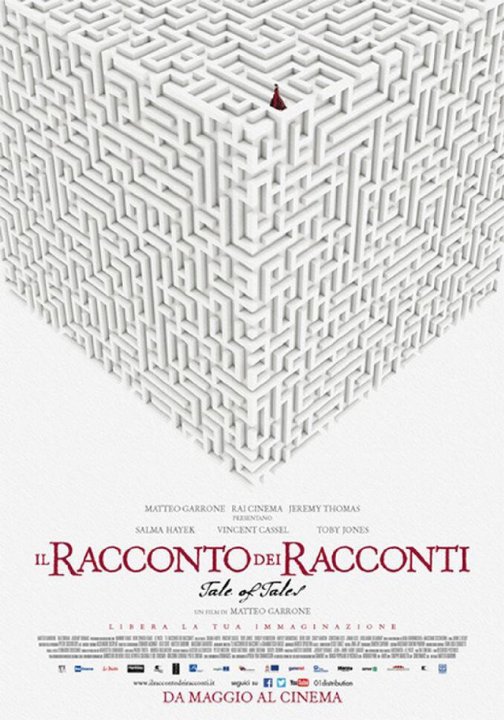 Plot: A street circus family serves as the common thread between three fantastic stories - a queen lives happy enough, but is bound to her husband makes an ominous deal; a king rules by libido until he falls for a most unlikely paramour and a king obsessed with a flea takes little notice when he marries his daughter of to an ogre. Based on the fairy tales of Giambattista Basile. -- Chris Kavan

A collection of Grimm-esque fairy tales coinciding, and told simultaneously, with each other. Each story has a classic fairy tale look and vibe, but they all share harsh lessons for the characters that upend some typical cliches. I found the trio of tales to be completely unpredictable and visually entertaining. The huge multi-cultured cast brings a more rich environment to the beautiful settings. Set design, costume, and special effects (about 80% practical) are top notch, considering the lesser budget. It has universal appeal. One of the years most underrated/overlooked that's not to be missed.

A fairy tale not suitable for kids...I liked it !

"Here is the husband that you chose for me. Please, forgive me."

"Tale of Tales" is based on stories of the 17th century author Giambattista Basile from Napoli. Three strange tales are ingeniously interwoven and subsequently they end with a not so impressive conclusion. Each of them are atypical fairy tales. One more insane than the other. You can expect some dark stories with a fairly shocking ending. Three kingdoms, each with their own concerns and problems. The moment I saw the queen of Longtrellis consuming the bloody heart of a sea monster, I knew these weren't exactly stories I would read to my children. Rather, these are fairy tales for adults provided with some rather strange twists.

In well-known fairy tales, events are usually presented more rosy. And almost all of them …

No posts have been made on this movie yet. Be the first to start talking about Tale of Tales ( Il racconto dei racconti )!