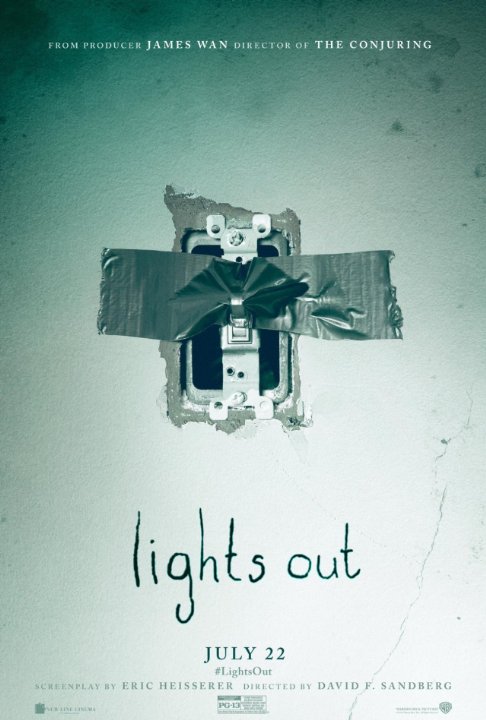 Plot: Based on the 2013 short of the same name - a woman finds herself tormented by a creature that only appears when the lights go out. -- Chris Kavan

Pretty rudimentary in the ways of jump-scare horror, but "Lights Out" isn't without some fairly nifty touches.

It can be tricky adapting a short in to a full-length film, but David F. Sandberg managed just fine. Really liked the design of the monster and the story to go along with it. Characters were a bit thin, but overall a great experience. I also like the fact Sandberg chose piratical effects over CG when he could. Effective horror, make sure to watch with the lights out.

I can see how this made a great horror short, but it felt a little thin as a feature. The concept is great and there were a lot of scary moments, but some of the reveals would have been more effective later in the movie, and the backstory could have used more depth. Lastly, the concept seemed an invitation to some really cool and innovative cinematography, but while the camera work was good, it didn't blow me away as I had hoped.

Not as frightening as I thought it would be

"You should let me stay at your place, just for a night. Good luck with that one, buddy."

In the vinyl era (Indeed, I experienced those days as well) you could purchase an extended version of a single. The so-called maxi-single. Sometimes you were surprised by the extended version of the single because not so bad sounding variations were added in an artistic way. However, in most cases it was just a miserable elongated version with unnecessary repetitions and tedious long intros and outros. The final feeling was more like a slight disappointment and a sudden realization that the music industry tricked you again and took away your laboriously saved money in a shrewd way. A maxi-single wasn't a guarantee that a sublime sounding music tune would sound even more impressive. I have the …

Could have been a lot better

With such a good concept in a pity that more effort wasnât put into the story. I really enjoyed the short film the movie was based on, also directed by David F. Sandberg, and I couldnât wait to see the long theatrical version. I was simply expecting much more than what I got.

The beginning of the movie showed promise of a good movie and then itâs all downhill. There is almost no character build up and the storyâs background is based on a very mediocre plot. The filmâs original idea needed a far more original story. A girl ghost that haunts a family and the heroic daughter who delves into its past and finds a way to destroy it. Very unoriginal, but with more character depth and dialogue, this could have been overlooked considering the idea of a ghost only appearing when the …

Watch it in the Dark

'Lights Out' is the feature length adaptation of the famous short seen on YouTube. Up and coming director, Sandberg, crafts a competent small-budgeted horror film. Sufficient amounts of tension are built throughout to accentuate the jolts. It felt as though each scary scene, while paced very well, was purposefully formatted to end on a jump-scare. Admittedly, they are examples of how to properly execute a jump-scare. Every individual eerie moment has a payoff. To me, this structure didn't manage to sustain tension throughout the entire film - providing a somewhat fragmented feeling of fright. One elongated sequence in the climax did retain the same level of fear I had while watching the original short. Some time is spent on uncovering the mystery of this entity hiding in the …

No posts have been made on this movie yet. Be the first to start talking about Lights Out!