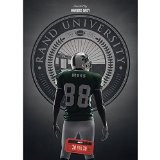 One can't deny Randy Moss is one of the most talented receivers in football. His story, however, could have gone much differently as it seems, at times, he was actively trying to sabotage himself. Luckily for us he got back on the right track and even though he still has a bit too much swagger, he proved on and off the field he was the better man, though he could have permanently derailed many a time.

No posts have been made on this movie yet. Be the first to start talking about Rand University!