The End of the Tour Movie Information 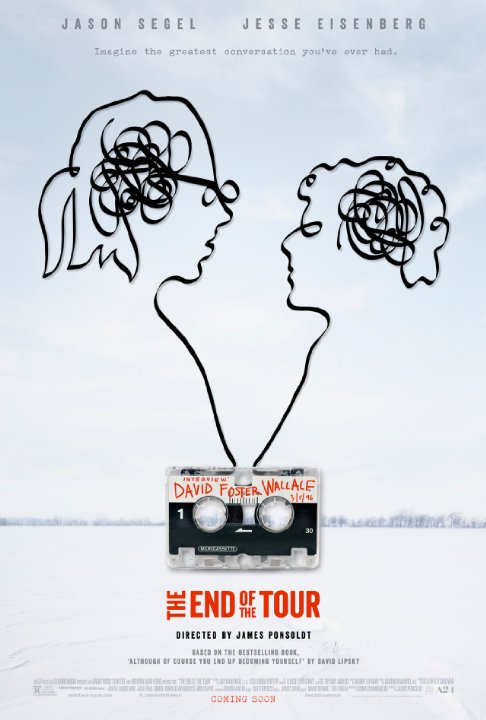 Plot: Rolling Stone magazine writer David Lipsky interviews author David Foster Wallace for an upcoming article. As the two talk and bond, Wallace opens up and shines a light on his method to writing. -- Chris Kavan

A solid and thorough character analysis, "The End of the Tour" is nothing short of unique.

A bit dragging and Jason Segel made me uncomfortable watching the film (not entirely sure why).

'The End of the Tour' is entirely made up of a series of conversations that feel so honestly true to life. Part of that is due to a great portion of the dialogue already existing in audio format from the real men being portrayed. I found myself immediately drawn into their words, understanding their feelings towards their career's and each other. The emotions brought about from their conflicts and comroadarie are nicely understated. Segel and Eisenberg easily disappear into their roles right from scene one. They give two of the best performances seen all year.

The End of the Tour

The End of the Tour (2015) R In 1996, immediately after the publication of his second book, David Foster Wallace (Jason Segal) goes on a five-day book tour with Rolling Stone writer, David Lipsky (Jesse Eisenberg). I think that if I had read either of David Foster Wallaceâs books I would have enjoyed this more. Itâs a movie mostly about two men, both writers, discussing life, writing and being famous. Segal gives a great performance as the rather withdrawn and quite strange Wallace. The film shows that Segal has quite the range, as his performance is brilliant and moving. I felt that Eisenberg didnât have to work too hard in his performance, and the film bogs down a little when they guys are traveling by themselves in the car. I wanted to like/love this picture, but like a few …

No posts have been made on this movie yet. Be the first to start talking about The End of the Tour!