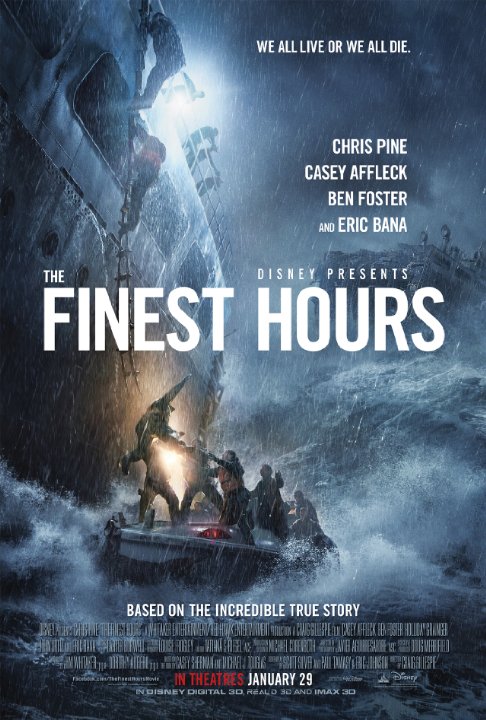 Plot: In 1952 one of the worst storms on record hit the East Coast. On the ocean waters, an oil tanker found itself literally ripped in half. On a lifeboat a four-man Coastguard crew faces sub-zero temperatures and massive waves as they race to save the 30-man crew before their ship sinks. -- Chris Kavan

"The Finest Hours" suffers from a plain and mostly uneventful script as well as a myriad of annoyingly absurd accents, each one sillier sounding than the last.

Cool true life story about an incredible rescue operation by the Coast Guard is watered down into a expensive looking if emotionally detached sea adventure film.

A harrowing rescue in the worst conditions possible on a mission that most would consider a suicide run. In 1952, it just so happened that a member of the Coastguard, Bernie Webber, along with three other men, tempted that fate and made one of the most daring rescues of all time.

Disney's Finest Hours didn't make many waves at the box office. It had a quiet premiere and a quiet exit. It's too bad, as the film has gathered an excellent cast with Chris Pine taking on the role of Webber while Ben Foster, Kyle Gallner and John Magaro are the rest of his crew. Holliday Grainger takes on the role of the tough female, Miriam, while Eric Bana gets the nod as the unlikeable Coastguard chief, Daniel Cluff. Rounding out the cast as a few of the men trying to survive on half a boat are Casey …

This film needed a rescue operation as well.

This looked like the movie "Titanic". The iceberg was absent though. But still, the oil tanker was broken in two like a toothpick by the raging sea and went to the bottom of the ocean. There was also a romance. Only this didn't happen aboard of the sinking ship. The final result is a Disney disaster movie, suitable for couples. The female audience can melt away because of the love story. A tribute to invincible love and a prove that infinite love can overcome every pesky obstacle. An example of how kindred spirits can find each other telepathically and use each other as a beacon to be united again. I never expected that such beacons consist of a row of old-timers with their headlights directed to the ocean. The male audience can enjoy the exciting rescue operation …

'The Finest Hours' is better than I anticipated. This 'based on real events' tale plays out in that classic Disney fashion, while not being overt about it. They manage to keep the film light without sacrificing the life-or-death consequences of the situation. The best example would be the tense scenes of disaster at sea. Deft direction keeps us on edge in moments of peril. I found myself clenching, and even gasping, during sudden bursts of danger. Urgency is always prominent. There was enough excitement between the action on the broken ship and the treacherous weather endured by the rescuers to make this a fulfilling watch. The drama on land was not as engaging. By the halfway point of the film we start to cycle between the three occurrances till the finale. The scenes on land, …

No posts have been made on this movie yet. Be the first to start talking about The Finest Hours!