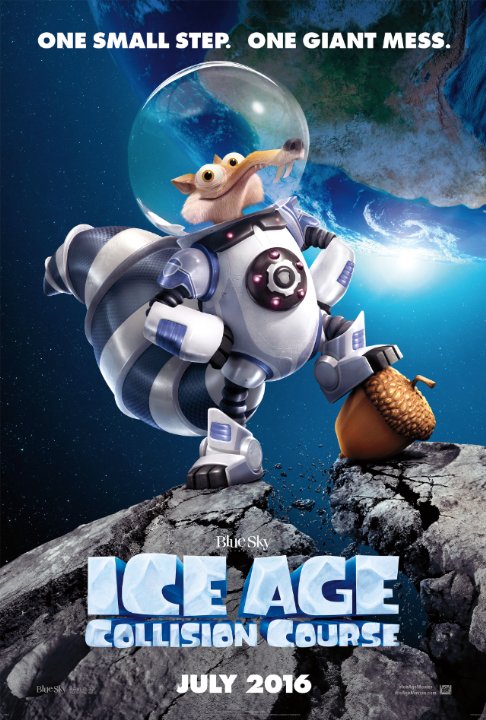 Plot: Scrat's ever-elusive quest to get his acorn catapults him into space - and into a series of events that lead to cosmic chaos. Now the entire herd, led by Manny, Sid, Diego and the rest of the crew must move on. Their adventure is filled with laughter and peril - especially when an the brother of an old nemesis shows up - but the group will find new friends and, hopefully, a new place to call home. -- Chris Kavan

Holy Crap THIS SUCKED! Oh my god, this was one of the worst theatrically released animated movies ever made, Collision Course is a complete insult to the franchise with painfully bad humor that is Chipmunks levels of bad, An abysmally written script, Scrat isnât funny anymore, Buck was completely ruined, The concept of sci-fi in Ice Age is ridiculous, The characters that were once likable are either bland or annoying as hell, And the Sid Romance subplot is completely unnecessary and dumb, And no sense of imagination or originality. Watch 2016âs other animated summer films Finding Dory and The Secret Life Of Pets instead please, Kids deserve better than this garbage. Rating: Rotten

What Did You Expect?

'Ice Age: Collision Course' is yet another lazy, unnecessary addition to the long running 'Ice Age' series. The lack of effort shown in the previous two installments continues. I could not care less about these characters. There's really nothing present to warrant a watch for anyone over the age of five (who hasn't already seen good movies). All of my criticisms from the 'Dawn of the Dinosaurs' and 'Continental Drift' are retained. I can't say anything different here. It's the same unfunny, moronic, lame, boring crap on repeat. Even the cheerful slapstick efforts of Scrat are finally starting to wear on me. At least I can say that this one was slightly more watchable than 'Continental Drift'. There's so much better animation to see this year.

No posts have been made on this movie yet. Be the first to start talking about Ice Age: Collision Course!