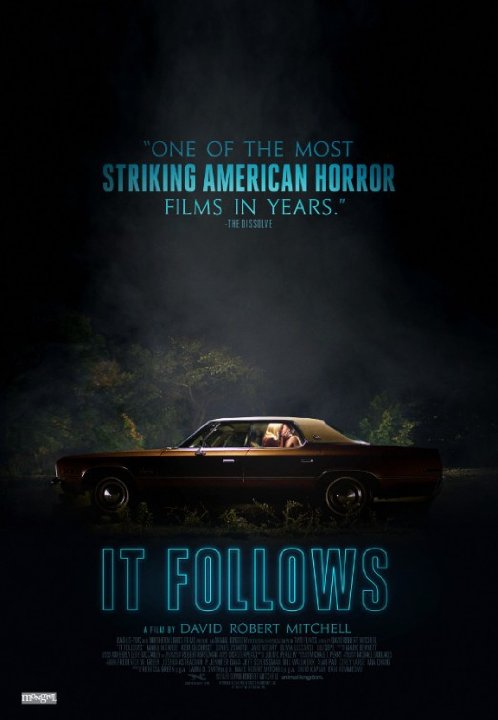 Plot: Jay, a 19-year-old, should be spending Autumn worrying about school, boys and spending week-ends at the lake. But after a seemingly innocent sexual experience she finds herself unable to shake the feeling that something is stalking her. As strange visions begin to plague her, she turns to her friends to help escape this horror - if she can. -- Chris Kavan

Although ominous and plotted with plenty of scary moments, "It Follows" loses you with its developmental scenes by almost boring you to death, and when the movie is finally over, it feels quite unfulfilled.

Read the review at the link below for pretty images from this great horror film.

Around this time two years ago, I was writing a year-end review for my fourteenth favorite film of a 2013, one of the two best film years of this century. The film was James Ponsoldtâs The Spectacular Now, the marvelously nuanced and tender romantic drama set in an American high school. That lovely, observant teenage film further confirmed the immense talent of Shailene Woodley and introduced me to the dynamic and charismatic Miles Teller. I was moved more than I ever could have expected by how frankly and empathetically it entered the world of its adolescent protagonists and how thoughtfully it observed them. So few directors show anything more than a passing …

The mood was tremendous but it's not really creepy

"This thing. It's going to follow you. Somebody gave it to me. And I pass it to you."

Now this was a movie I really was looking forward to. I'm a horror fanatic who's always on the lookout for films in this genre that leave others far behind in terms of originality and atmosphere (such as "He never died", "Goodnight Mommy", "The Babadook" and "Spring" for instance). And many advised me to watch this one. The fact that the hype about this movie was disproportionate, made my expectations go sky-high. And did it meet my expectations? Partially it did and partly it didn't. The fact that I went outside for some fresh air after I had watched it and I looked briefly over my shoulder because of the feeling that I was being watched, means that the atmosphere was quite alright. On the other …

Yeah, "It Follows" is getting four stars.

Filmmaker David Robert Mitchell stirs up a terrifically scary, smart and unconventional story with engaging characters and an atmosphere that oozes with tension and uneasiness. "It Follows" is an exceptionally well crafted horror film, nailing the tone perfectly through its beautiful cinematography and electronic, almost Carpenter-like score. There are genuinely horrific moments throughout that will force you to peak behind you every so often upon finishing the film. "It Follows" just manages to be a very clever, beautifully directed and surpremely badass horror picture from a director whose future work I sure as hell look forward to. We need more horror films like this and less like "Ouija" and "Annabelle."

No posts have been made on this movie yet. Be the first to start talking about It Follows!