Deliver Us from Evil Movie Information 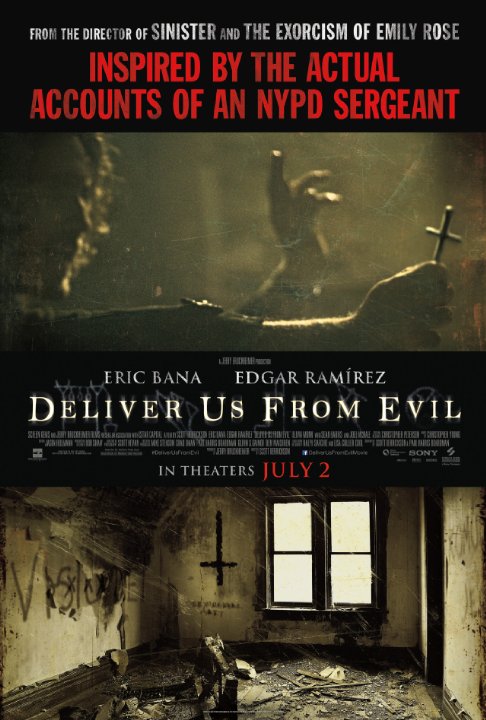 Plot: A series of bizarre and disturbing crimes are sweeping across New York City. Officer Ralph Sarchie, dealing with his own personal demons, joins forces with a priest, an exorcist specialist, who is sure the crimes are due to demonic possessions. -- Chris Kavan

Sarchie : I've met a lot of priests. You don't seem the type.
Mendoza : And I've known a lot of cops, and you're exactly the type.

The most common topic in the horror genre is exorcism and everything that has to do with possessions. I admit that this is the closest match to everyday life because everyone has something he's excited and passionate about. It's like he or she is possessed by it. There are also individuals who must fight their personal demons every day. It's obviously not quite the same as the case detective Sarchie is confronted with. I'm obsessed about watching movies and sometimes I consider my job as a real demon that needs an exorcism. But rather that, than the entity that rages in "Deliver us from Evil". It's not an original film and certainly not …

Scott Derrickson is certainly a competent director, if not inconsistent. From the near-masterpiece THE EXORCISM OF EMILY ROSE, to the scary, if flawed, SINISTER which had it's fair share of frights (two words: lawn mower.) Now, with Deliver Us From Evil, Derrickson returns to the 'based on a true story' angle, with mediocre results. It's not a terrible film, the camera work, soundtrack (there's a clever use of The Doors music) and cinematography, DUFE has enough to spare. Unfortunately, despite an interesting story, the scares are not as frequent as one would like. Derrickson's attempt at meshing law procedural and demonic possession horror is never as successful as his courtroom/horror combo he pulled off so well in Emily Rose. Though when the scares hit, they are mighty …

No posts have been made on this movie yet. Be the first to start talking about Deliver Us from Evil!