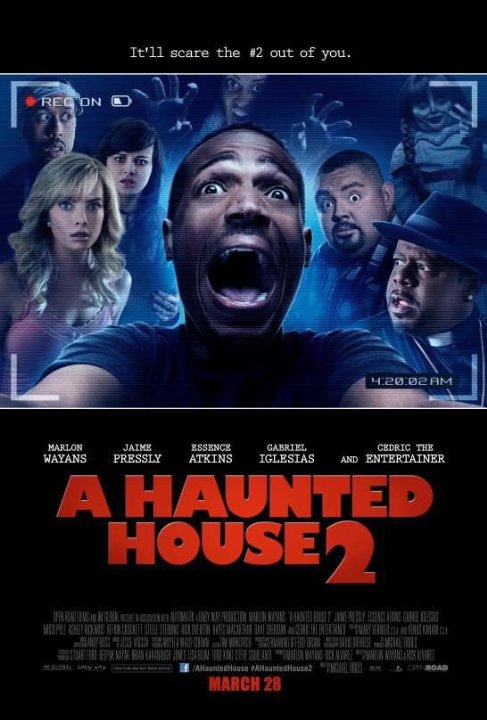 Plot: A car accident takes Kisha away from Malcolm - who, looking to start anew, marries Megan. The couple and two children buy a new house - but the paranormal incidents follow him - and start to affect their home and children. Things get even more complicated when the no-longer-dead Kisha moves in to the neighborhood. -- Chris Kavan

The first film was tolerable, as it took the found footage genre to task - ridiculous as it was. This sequel still pokes fun at the genres, but also takes stabs at The Conjuring, Sinister and The Possession - and that's its failing. By casting a broader net, it actually fails to deliver - other than a nice turn from Gabriel Iglesias, I really didn't find much to like here. Oh, and Marlon Wayans has sex with the Annabelle doll (who sends him naked selfies and burns his clothes). That's the film in a nutshell right there.

Crossing new lines and breaking old barriers, A HAUNTED HOUSE 2 is the sequel to the hilarious box-office hit starring Marlon Wayans as Malcolm who, after exorcising the demons of his ex, is starting fresh with his new girlfriend and her two children. This movie was really stupid and this movie was not for every one but I liked this more then the first and what i mean is i don't like this film is thought it was so bad that it's funny.

No posts have been made on this movie yet. Be the first to start talking about A Haunted House 2!