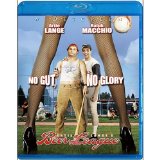 Plot: An unemployed slacker (Lange) inspires his softball teammates to improve their game so they won't get kicked out of the local league.

Women will probably HATE this movie - this is the ultimate guy movie .... crude, vulgar, sexist, demeaning to women, disgusting, and obnoxious - just like US! (P.S. It's goddamn funny too).

Im an Artie Lange fan but this movie was terrible!!!

A low-brow comedy strictly for the guys; the abrasive Artie Lange is an acquired taste, but there are a few chuckles and it's good to see Ralph Macchio again. Final Grade: C

Funniest Movies Ever by Mike

Movies I Own by Photo20

Movies I Own by kordic

Movies from 2006 I've seen by Corndog

No posts have been made on this movie yet. Be the first to start talking about Artie Lange's Beer League!