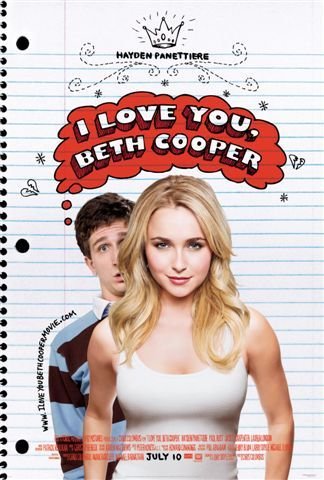 Plot: A nerdy valedictorian proclaims his love for the school's hottest girl, Beth Cooper, during his graduation speech. He's more surprised than anyone else when she shows up at his house later that night to show him the time of his life.

Denis Cooverman's (Paul Rust) speech involves his love for Beth Cooper (Hayden Panettiere) during the graduation. Friends Cammy (Lauren London) and Treece (Lauren Storm) and Rich Munsch (Jack T. Carpenter) go in an adventure so stupid its like putting needles in your eyes. Such horrendous screenplay, lousy performances and lack of morals and drinking and driving. Only thing worth liking was the soundtrack. I never even smiled a bit during the viewing of I Love You, Beth Cooper, which supposedly have been a comedy.

it just like the other story... usual story nothing new.. it was ok. another teen comedy

This movie had some funny moments, but if you don't see it you aren't missing much. It's definitely not a must see. It's not even awesomely horrible. It's really just whatever.

Movies I Own by Crowfly

No posts have been made on this movie yet. Be the first to start talking about I Love You, Beth Cooper!