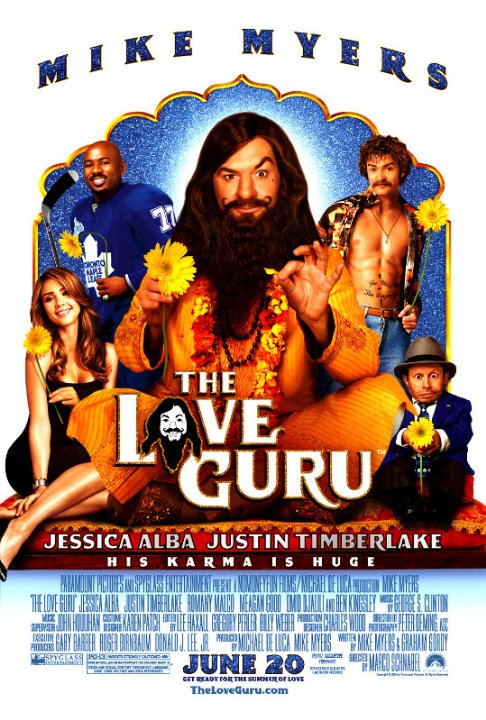 Plot: Mike Myers plays the Love Guru Pika who must try and get the star hockey player of the Toronto Maple Leafs back together with his wife so they can win the Stanley Cup.

Did Mike Myers really sit down one day on some beanbag and think that 62 million dollars was worth spending on a comedy film that parodies New Age Hindu self-help gurus? And which Hollywood executive(s) signed off on it? Was Deepak Chopra that popular in the 2000s? I don't know, and frankly I don't care. I just want my 87 minutes back.

So Mike Myers plays the Love Guru who must try and get the star hockey player of the Toronto Maple Leafs back together with his wife so they can win the Stanley Cup. Mike Myers used to be in good comedy movies, but now Mike Myers is kind of a pain to watch on screen sometimes and the Love Guru is one of them.

OK so first of all many people out there know that Mike Myers was the star of Wayne's World 1 & 2, Austin Powers 1-3 and many other notable comedies. Some may also know him from Saturday Night Live back in the 90's when he did several skits with Ben Stiller, Chris Farley, Dana Carvey, etc. But anyway we go from all of these great achievements to the Love Guru. It normally works when Myers plays more than one character but in this movie when he plays Young Pitka, Teenage Pitka, Guru Pitka and himself it is just not as funny as when he played Dr. Evil, Austin Powers, Fat Bastard and Goldmember in previous Austin Powers movies. Mike also found success with the cartoon movie Shrek, which has really started to water down after part 3. I would even go out on a limb and say that Shrek the Third …

How did I hate this movie? Let me count the ways...

I can't say I was expecting the launch of a new franchise like "Austin Powers", but this one isn't even worth it as a stand-alone. Either I've aged since Mike Myers last created one of his wacky big-screen characters, or he has lost his touch at doing so.

Other critics are saying the humor is crude and sophomoric, but they at least admit there was humor. I found precious little that was funny. However, I will say that the one or two times I laughed, they were big belly laughs.

Never has a mere hour and twenty minutes seemed so excruciatingly long! Especially, compared to a movie like "Sex & the City" where nearly two and a half hours flew by enjoyably.

Skin Rating = 2 (out of 4). Although Justin Timberlake is awful in …

Worst 8 of 2008 by Stoney McStonerson

No posts have been made on this movie yet. Be the first to start talking about The Love Guru!