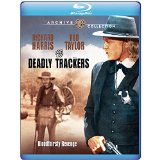 Plot: A Texas sheriff wrecks revenge on a band of desperados who murdered his wife and child.

This is the way a western should be done.My only problem with it was the ending.Damn that Mexican sheriff!!!

Worst 8 of 1973 by Stoney McStonerson

No posts have been made on this movie yet. Be the first to start talking about The Deadly Trackers!