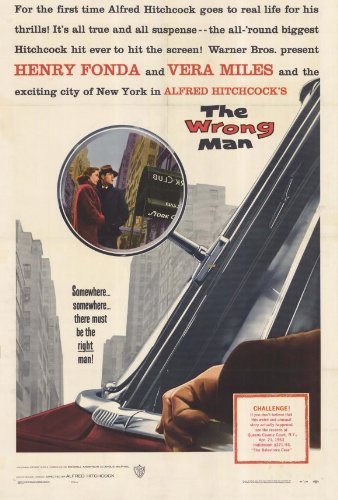 Plot: Based upon the actual case of Emmanuel Balestrero, this unusually dark Hitchcock film chronicles the ordeal of NYC musician mistaken for an armed robber. As his case moves through the faltering criminal justice system and he he tries to prove his innocence, his wife has a nervous breakdown.

If "The Wrong Man" weren't based on a true story, there's a good chance Alfred Hitchcock could've made it up, as all the pieces of the great director's most well-known works are there.

Donne (to throw in a gratuitous poetry reference) might have been right when he described how death was subservient to man's whimsy, but Hitchcock was almost certainly correct when he demonstrated in this film that man himself was but the subject of eternal peonage to fate. Hitchcock knew that each and every man and woman had a fear of what fate would determine to be the ultimate course of their lives, and so decided to take advantage of that fear and create brilliant suspense through the (allegedly) true story of how a figure of average social standing, with whom many could identify, was thrown into the lion's den because of a series of unfortunate coincidences.

So many of Hitch's films deal in death, but death, as Donne wrote, can often come at our own terms. However, despite our …

No posts have been made on this movie yet. Be the first to start talking about The Wrong Man!